I suspect nearly all economists are naturally reluctant to embrace cases where agents appear to miss opportunities for Pareto improvement ... However in most other areas of the discipline overwhelming evidence [in favor of wage stickiness] is now able to trump these suspicions. But not, it seems, in macro.

While we can debate why this is at the level of general methodology, the importance of this particular example to current policy is huge. Many have argued that the failure of inflation to fall further in the recession is evidence that the output gap is not that large.


You see, the question of wage (and price) stickiness, and hence of real effects of changes in nominal demand, was what the great rejection of Keynesianism was all about. And I mean all about. Back in the 70s, there was hardly any discussion of the determinants of nominal demand; what Lucas and his followers were arguing was that Keynesianism must be rejected because it was unable to derive wage stickiness from maximizing behavior.

Sticky wages form the basis of the explanation of the existence of unemployment in Keynesian economics. If there is a fall in aggregate demand, basic microeconomic arguments suggest that people as maximizing agents will lower their "reserve wage" in order to keep the economy at full employment. This is not what is observed. People do not lower their reserve wage; people become unemployed. There are many reasons given for this (e.g. nominal wage cuts or hiring new employees at a lower wage are bad for morale, the coordination problem where no one person wants be the one to lower their reserve wage, etc). It is a fruitful arena for study in economics. 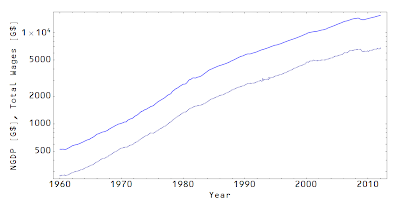 These two nominal aggregates are effectively proportional to each other with NGDP/NW = 2.1, which means that P' is a constant (which I have normalized to 1). Here are the two prices (blue, red) shown on the same graph (with the CPI in green standing in for the price level): 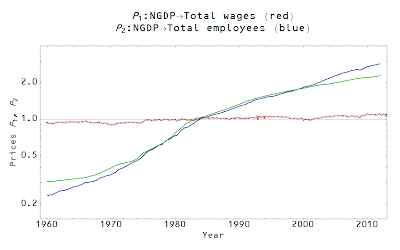 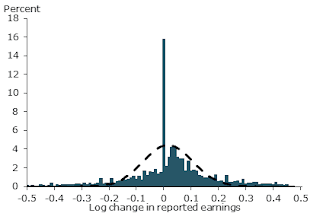 This is an empirical observation. There is no a priori reason that P':NGDP→NW must have a constant price P'; it could have had the changing relationship observed in the analogous graph to the one above between the aggregate demand (solid) and the labor supply (dashed): 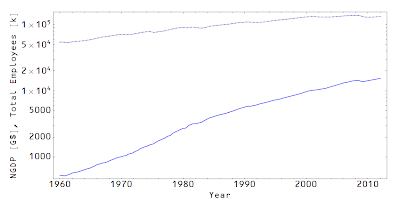 This small variation seen in P' can be used to slightly improve the fit to the price level P by taking P→P*P'  (old fit in blue, new in purple with the price level in green): 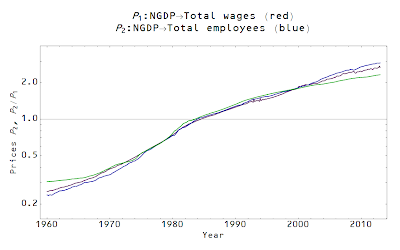 But overall nominal wage rigidity is the observed dominant market interaction with nominal wage changes being a small effect. To reclaim the physics analogy using the Hydrogen atom from Brad DeLong, sticky prices are the Schrodinger equation and wage flexibility is the Lamb shift.