Via Brad DeLong, Nick Rowe has a post on neo-Wicksellian indeterminacies that makes me realize I have awhile to go before I really understand this stuff. There is at least one aspect of the problem that a) I think I understand and b) I think I can resolve. Here's Rowe:

The standard answer simply assumes that Y=Y* and p=0% and r=r* [i.e. output = long run output, etc] when the 5 years are up, and solves backwards from there. Which means both p and Y jump down and r jumps up when the bad news hits. We have deflation and a recession for 5 years, with that deflation and recession slowly ending as we approach the end of the 5 years.

John Cochrane is not (as I read him) saying his solution is the right one. He is saying it is no less right than the standard solution.


Following what I did here, we have three economies with the same history of AD shocks and changes in the monetary base that start from the same starting point. The only difference is that the information transfer (IT) index (related to the unit of account function of money and whether an economy is better described by a quantity theory of money or an IS-LM model) are at three different levels (high = red, medium = gray, low = blue): 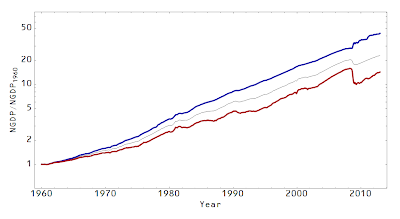 The first thing that jumps out is that, ceteris paribus, a lower IT index economy grows faster. The second thing that jumps out is that the effect of QE is strongly dependent on the IT index a the time. The same level of QE in a lower IT index country leads to growth or a lack of a slowdown (say, Sweden, Israel or Australia) while the remaining slump becomes more significant as the IT index grows. Basically, QE would have worked when Ben Bernanke wrote his thesis in 1979. Anyway, that is a rehash of this post.

I want to return to Rowe (and Cochrane) talking about the idea that the New Keynesian (NK) equations are indeterminate in the sense that hitting the ZLB can lead to a boom or a bust depending on how you solve them. So I used the NGDP curves above to model the interest rates (again, high IT index = red, medium = gray, low = blue ... interest rate data is shown in very light gray): 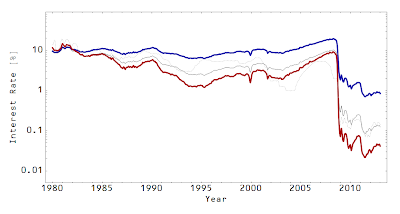 You can see that all three economies head towards the "ZLB"*** but you can also see in the NGDP graph above that this is associated with a boom (blue) or a protracted recession (red) depending on the IT index. Another way, the IT index is the parameter breaking the indeterminacy of NK models, choosing the equilibrium.

For completeness, here are the model solutions for the price level and interest rate for the best fit IT index (model in dark gray, data in light gray):

** The title is a reference to the Newsradio episode Airport where Mr. James is wistful about Dave's talent for "RLP" (Resolving Logical Paradoxes).


*** In the information transfer model, the zero lower bound and the liquidity/information trap are only approximately the same thing. See this post.
Posted by Jason Smith at 12:30 PM