What is economic growth?

Disclaimer: Ok; I mention mathiness, but that's not what this post is about. It's about modeling economic growth in general -- and concludes that the lack of accelerating growth is due to an entropic headwind (at least in the information equilibrium model).

Dietrich Vollrath at Growth Economics has a really good overview (and sensible path forward -- i.e. empirical research) of the whole Romer/mathiness brouhaha. Actually reading it reminds me of that old saying about rival research groups [0]:

The animosity between two research groups is inversely proportional to the difference between their research.

Vollrath also (sensibly) says that maybe price taking (the Lucas side) is valid in certain scenarios and monopolistic competition (the Romer side) in others. But in the end, both of these are models where 'innovation' just kind of happens:

The assumptions made by the market power [monopolistic competition] theories are just as impossible to justify as the competition [price taking] theory. The price-taking theory assumes that people just randomly walk around, bump into each other, and magically new ideas spring into existence. The market power theory assumes that people wander into a lab, and then magically new ideas just spring into existence, perhaps arriving in a Poisson-distributed process to make the math easier. Why is the magical arrival of ideas in the lab less fanciful than the magical arrival of ideas from people meeting each other? In the models, they are both governed by arbitrary statistical processes that bear no resemblance to how research actually works.

So apparently growth is in information equilibrium with some random process of innovation! (Seriously, economists, you should take a look.) Ok so what is the problem we're trying to solve with these different views of growth economics? Here's Vollrath again:

One thing we have come to a consensus on is that economic growth is driven by innovation, and not simply accumulating physical or human capital. That innovation, though, involves non-rival ideas. Non-rival ideas (e.g. calculus) can be used by anyone without limiting anyone else’s use of the idea. But modeling a non-rival idea is weird for standard economics, which was built around things that are rival (e.g. a hot dog). In particular, allowing for non-rival ideas in production means that we have increasing returns to scale (if you double all physical inputs *and* the number of ideas then you get more than twice as much output). But if we have increasing returns to scale, why don’t we see growth rates accelerating over time?

Well ... in the information equilibrium theory I'm working on here ... that's because as an economy grows in size, that economy finds itself less and less likely to be made up of many high growth states. There are more ways a larger economy can be organized using more low growth firms than high growth firms in much the same way that thermal energy can be carried away in more ways by many low energy photons than a few high energy photons. And this seems to be a good empirical description of economies: 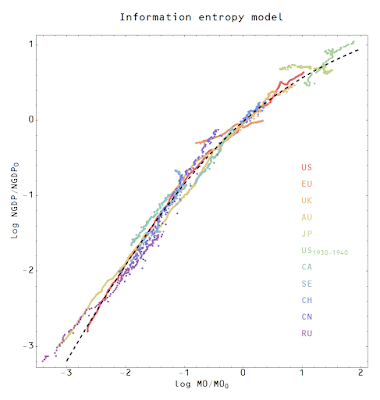 We defined an economic temperature that goes as 1/log M where M is the monetary base and found it did a good job of reproducing the price level and nominal output of various economies.

Note that this lack of accelerating growth rates is a macro property -- it is a property of a large number of firms in a large economy. There may be differences in the bulk properties of the distribution over firms among different countries leading to different rates of deceleration, but the general lack of accelerating growth rates is a general property of the partition function and the economic temperature. That is to say the deceleration is an entropic force. Think of it as a headwind that increases with the size of the economy (under a particular monetary regime).

This means that there's at least one model (the information equilibrium model) where both price taking (Lucas) and monopolistic competition (Romer) are theoretically misguided. Randomly running into each other in the hall or randomly forming an idea in a lab is an attempted micro model of an entropic force (see e.g. here). Like Calvo pricing, it is not correct at the micro level. It is similar to adding a diffusion force proportional to the local density gradient to the microscopic theory of atoms -- no such force exists, but it would help explain the phenomenon of diffusion if you didn't have the concept of entropy. But if you do have entropy, that microscopic diffusion force is unnecessary.

[0] I don't know if this is an actual saying, but at least I say it from time to time. It in a sense explains the Scott Sumner - Paul Krugman wars. Their entire disagreement could be summarized to hinge on the ability of expectations of monetary expansion to free a country from a liquidity trap. Krugman says its hard (hence it being a trap); Sumner says its easy.

[1] Innovation models may well describe what is happening at the micro level (individual firms), and may be useful to understand differences between either the first order information equilibrium model and empirical data or differences between different countries. One thing they aren't needed for is to explain the lack of accelerating growth.

[2] This headwind could be visualized as an economy taking longer and longer to explore (via dither) the nearby state space. A possibility is that not only is the volume of states growing, but the dimension is growing as well. That's a random placeholder thought. From Jaynes: "In constantly exploring the neighboring states, the economy is always more likely to move to one of higher than lower entropy, simply because there are more of them (greater multiplicity)."