Did the ACA decrease unemployment?

Scott Sumner repeated his unsupported claim that the expiration of unemployment insurance in 2014 decreased unemployment. It was picked up by John Cochrane and Tyler Cowen. I looked at the data a year ago and showed that a sizable chunk of it could be explained by increasing job openings (and assuming a matching model) in the health care sector brought on by the ACA going into effect in 2014:

Additional jobs would be created via a Keynesian multiplier. I tweeted about this and was asked how much higher unemployment would have been without the ACA and estimated 0.5 percentage points higher.

That estimate was loosely based on this model of employment equilibrium; however I thought I'd look at it a bit more rigorously. I re-ran the model fitting only to the data before 2014 and found that the impact was even larger at 1.3 percentage points: 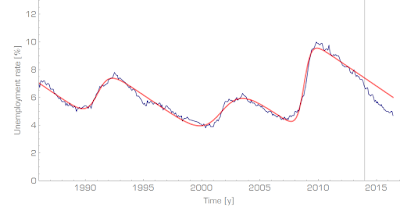 It is true that a lot of things went into effect at the same time, but using a typical Keynesian multiplier of 1.5 accounts for about half of the boom in the total number of jobs and the biggest increase in openings was in health care. That's a pretty consistent story.
Posted by Jason Smith at 1:13 PM