There's really no specific evidence right now. This speculative extrapolation based on not much else besides assuming when the Fed increased interest rates QE3 would unwind as fast as it started up is clearly wrong. However, the information equilibrium (IE) model doesn't tell us exactly how fast the variables involved in a given IE relationship change so my speculation was probably unwarranted. If left to market forces, the variables should basically follow a random walk towards a new equilibrium.

The interest rate model (see the paper) is basically


where r is some short term interest rate (we'll use the effective Fed funds rate), MB is the monetary base, and c and b are parameters. This model predicted that a rise in the interest rate r would result in a fall in MB. So far, it is falling ... slowly. David Beckworth noted what he called passive unwinding. Basically, in the IE model version, NGDP continues to grow which causes the (information) equilibrium interest rate to rise. Eventually, the equation above holds.

But is that really validating the model? How will we know? This post is an attempt to understand that question. First, let's look at some straight forward extrapolations of the trends in the monetary base -- a kind of baseline model: 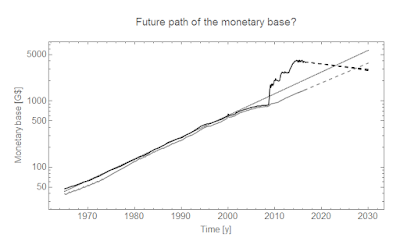 Ok, those are the baselines -- what does the IE model say? Let's assume the model is perfect, that NGDP is on a log-linear path from 2013, and ask: what MB should we expect given an effective Fed funds rate r? Here's that model (blue, with two standard deviation error bands in yellow): 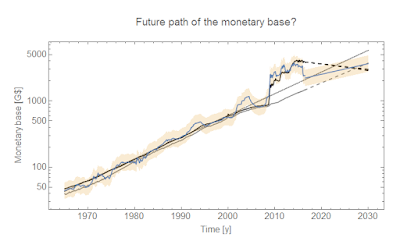 Now let's zoom in on the interesting part: 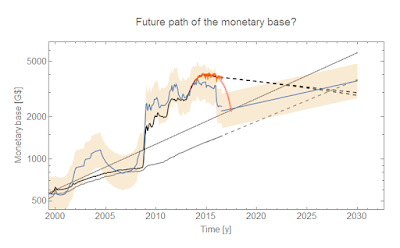 The IE model predicts movement towards the straight piece of the blue curve. My speculative extrapolation is shown in red and the most recent data (actually weekly source base data) is in orange. The new data is outside the error band and appears to be following the linear path (dashed black line). I would say that if the orange data continues to follow the dashed black path until it intersects with the 1965-1999 base extrapolations (dotted black), the interest rate model could be considered useless (in this sense).

There are two other possible factors that could ameliorate this data problem with the IE model. The first one is that NGDP could suddenly rise. This is almost the neo-Fisher view: a rise in interest rates leads to a rise in nominal output, a combination of real output and inflation (instead of just inflation). The model rejection above assumes a log-linear path of future GDP.

The second one is that our current situation represents a risk of recession. In the past, short term interest rates above the IE model path have been a precursor to recessions (the model above is inverted so that recession risk is associated with  the monetary base being below equilibrium specified by the interest rate r, but it is mathematically the same thing). This indicator is actually closely related to an inverted yield curve -- a standard indicator of slower growth or recession.

As I said before, the interest rate hike of December 2015 was a good test of the information equilibrium model. We should get a falling monetary base (faster than we've seen so far), a very large uptick in growth/inflation (the "neo-Fisher" outcome -- I seriously doubt this one), or a recession. In fact, Japan has been dealing with a low interest rate/low inflation environment much longer than we have and it seems there is an uptick in the number of mild recessions. I guess we'll see what happens.

PS The different extrapolations make me think of the GUT scale.
Posted by Jason Smith at 6:12 PM