Macroeconomics has no equilibrium data

I'm still in the process of recovering from a cold, so I've been just playing around with data and the dynamic equilibrium model. I thought I'd just post some things that maybe people might be interested in. However, it turns out these odds and ends did have a single narrative: macroeconomics apparently has no equilibrium data. Let's have a look ...

First off, here is the CPI data (all items) all the way back to the 1910s as a dynamic equilibrium model: 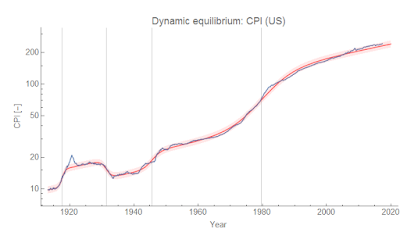 With the exception of the early 1920s, this is a fairly good description. We have major transitions for WWI, the Great Depression, WWII, as well as the "demographic" shift of the 1970s and 80s.

The other data I was looking at was assets and liabilities. Here is the description of the asset data where we view the housing bubble as an anomaly: 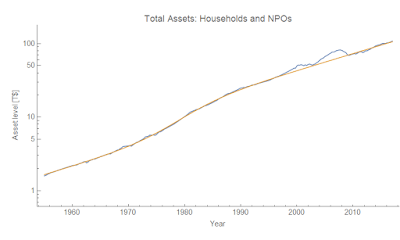 Comparing to the GDP data (blue below) we can see the single major shock to the asset level (yellow) still roughly corresponds to the demographic shift, but is lagged and has a different shape: 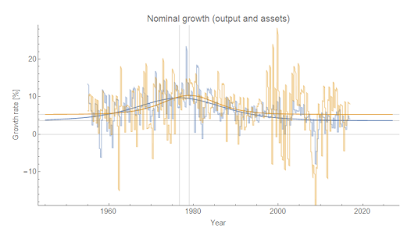 I would like to point out that this means that while the data might be in information equilibrium in the long run, most of the data occurs during a major non-equilibrium event. More on this in that narrative below.

Liabilities seem to be in information equilibrium with assets up until the dot-com and housing bubbles but overall the description doesn't seem to be very good. In playing around with the ratio of liabilities to assets, I saw what might be another major transition that I'll call the "credit transition". In fact, this transition looks a bit like something I called the federal spending phase transition early on in my economic musings (and before I had a blog). These are both fit with logistic functions like the dynamic equilibrium models (except the equilibrium growth rate is zero). The federal spending data (over NGDP) is in blue, the ratio of liabilities to assets is in green: 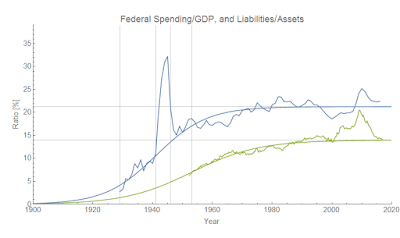 The "equilibrium" levels of spending to GDP and liabilities to assets are 21.3% and 14.0%, respectively. The anomalies are WWII and the dot-com and housing bubbles. The center of the spending transition (1941.1) basically matched up with the beginning of WWII, while the center of the liability ratio transition (1953.1) is a few years after the introduction of the first credit card in the US (1946).

So, about that narrative ...

The post-war period represents most of the quality macroeconomic data we have. However with several major transitions happening (a major demographic shift in the 1970s, government spending going from zero to 20% of GDP in the 1940s, consumer credit in the 1950s, each with a duration of 20 years or so), we really only have about 20 years of recent data that isn't affected by these shifts. And those 20 years have one of the biggest macroeconomic shocks since the Great Depression and two massive asset bubbles.

That is to say: there is no macroeconomic data that doesn't come from a period affected by major change. Therefore if anyone (myself included) thinks they have some sort of economic model where they can unambiguously point to an equilibrium, they're probably wrong. If someone thinks they know what "normal" growth is, it's more likely that it's been inflated by the demographic transition or an asset bubble.

I'm not saying this is a new observation, but rather that this is now an observation that is backed up by the information equilibrium model. I started moving towards this view in this post about whether the post-crisis recovery can be considered the "weakest recovery in American history". This is the first recovery that isn't inflated by a major demographic transition, a government spending transition, or a credit transition. It would be apples to oranges to compare it to any previous recession recovery we have quality data for. It may be one of the first "normal" recoveries in the US.

Basically: don't trust any macroeconomist making a claim of what is "normal".

When I tweeted this post, I said that macroeconomics has no control data which I thought was another good way to think about it. In a sense, all of the data comes from a treatment group (undergoing a major transition) with very little that could be considered a control group (some equilibrium or standard process).

PS I finally watched Boom Bust Boom, which is entertaining. I wondered why they asked John Cusack about anything, but I guess he's a blogger now. I just yelled "Two dollars!" at the screen each time he showed up. The funniest part was that they talked about how economic models didn't have money in them as if the quantity theory of money had never existed. They brought on Steve Keen for a second to mention money and debt. However, later on they had someone else say that economics shouldn't be approached like a branch of theoretical physics. If I had to pick an economist who used the most inappropriate physics models, it would be Steve Keen who treats the economy like it's a nonlinear electronic circuit. It's just a very odd juxtaposition.