[Update: A (in my opinion, better) version of this blog post has been reprinted as an article at Evonomics.]

Vox talked with Chris Hayes of MSNBC in one of their podcasts. One of the topics that was discussed was neoclassical economics:

[Vox:] The center-of-right ideas the left ought to engage[?]

[Hayes:] The entirety of the corpus of Hayek, Friedman, and neoclassical economics. I think it’s an incredibly powerful intellectual tradition and a really important one to understand, these basic frameworks of neoclassical economics, the sort of ideas about market clearing prices, about the functioning of supply and demand, about thinking in marginal terms.

I think the tradition of economic thinking has been really influential. I think it's actually a thing that people on the left really should do — take the time to understand all of that. There is a tremendous amount of incredible insight into some of the things we're talking about, like non-zero-sum settings, and the way in which human exchange can be generative in this sort of amazing way. Understanding how capitalism works has been really, really important for me, and has been something that I feel like I'm a better thinker and an analyst because of the time and reading I put into a lot of conservative authors on that topic.

I can hear some of you asking: Do I have to?

The answer is: No.

One thing that I think needs to be more widely understood is that Hayek did have some insight into prices having something to do with information, but got the details wrong. He saw market prices aggregating information; a crop failure, a population boom, speculating on turning rice into ethanol ‒ these events would cause food prices to increase, and that price change represented knowledge about the state of the world being communicated. However, Hayek was writing in a time before communication theory (Hayek's The Use of Knowledge in Society was written in 1945, a few years before Shannon's A Mathematical Theory of Communication in 1948). The issue is evident in my list. The large amount of knowledge about biological or ecological systems, population, and social systems are all condensed into a single number that goes up. Can you imagine the number of variables you'd need to describe crop failures, population booms, and market bubbles? Thousands? Millions? How many variables of information do you get out via the price of rice the market? One.

What we have is a complex multidimensional space of possibilities that is being compressed into a single dimensional space of possibilities (i.e. prices), therefore if the price represents information aggregation, we are losing a great deal of it in the process. As I talk about in more detail here, one way neoclassical economics deals with this is to turn that multidimensional space into a single variable (utility), but that just means we've compressed all that information into something else (e.g. non-transitive or unstable preferences). 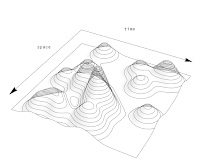 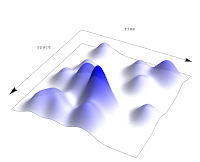 However we can re-think the price mechanism's relationship with information. Stable prices mean a balance of crop failures and crop booms (supply), population declines and population booms (demand), speculation and risk-aversion (demand). The distribution of demand for rice is equal to the distribution of the supply of rice (see the pictures above: the transparent one is the "demand", the blue one is the "supply"). If prices change, the two distributions would have to have been unequal. If they come back to the original stable price ‒ or another stable price ‒ the two distributions must have become equal again. That is to say prices represent information about the differences (or changes) in the distributions. Coming back to a stable means information about the differences in one distribution must have flowed (through a communication channel) to the other distribution. We can call one distribution D and the other S for supply and demand. The price is then a function of changes in D and changes in S, or

for our initial guess. Instead of a price aggregating information, we have a price detecting the flow of information. Constant prices tell us nothing. Price changes tell us information has flowed (or been lost) between one distribution and the other.

Marginalism and supply and demand

Marginalism is far older than Friedman or Hayek, going back at least to Jevons and Marshall. In his 1892 thesis, Irving Fisher tried to argue that if you have gallons of one good A and bushels of another good B that were exchanged for each other then the last increment (the margin) was exchanged at the same rate as A and B, i.e.

calling both sides of the equation the price of B in terms of A. Note that the left side is our price equation above, just in terms of A and B (you could call A the demand for B). In fact, we can get a bit more out of this equation if we say

If you hold A = A₀ constant and change B, the price goes down. For fixed demand, increasing supply causes prices to fall – a demand curve. Likewise if you hold B = B₀ constant and change A, the price goes up – a supply curve. However if we take tiny increments of A and B and use a bit of calculus (ΔA/ΔB →dA/dB) the equation only allows A to be proportional to B. It's quite limited, and Fisher attempts to break out of this by introducing marginal utility. However, thinking in terms of information can again help us.

We'll call I₁/I₂ = k for convenience so that

Now say the smallest amount of A is ΔA and likewise for B. That means


i.e. the number of gallons of A is the amount of A (i.e. A) divided by 1 gallon of A (i.e. ΔA). Putting this together and re-arranging a bit we have

Following this through the derivation above, we find

The real prices in a real economy will fall below the neoclassical prices. There's also another assumption in that derivation – that the number of transaction events is large. So even if the information transfer was ideal, neoclassical economics only applies in markets that are frequently traded.

Another insight we get is that supply and demand doesn't always work in the simple way described in Marshall's diagrams. We had to make the assumption that A or B was relatively constant while the other changed. In many real world examples we can't make that assumption. A salient one today is (empirically incorrect) claim that immigration lowers wages. A naive application of supply and demand (increase supply of labor lowers the price of labor) ignores the fact that more people means more people to buy goods and services produced by labor. Thinking in terms of information, it is impossible to say that you've increased the number of labor supply events without increasing the number of labor demand events so A and B must both increase.

Instead of the neoclassical picture of ideal markets and simple supply and demand, we have the picture the left (and to be fair many economists) tries to convey of not only market failures and inefficiency but more complex interactions of supply and demand. However, it is also possible through collective action to mend or mitigate some of these failures. We shouldn't assume that just because a market spontaneously formed or produced a result it is working, and we shouldn't assume that because a price went up either demand went up or supply went down.

The market as an algorithm


The picture above is of a market as an algorithm matching distributions by raising and lowering a price until it reaches a stable price. In fact, this picture is of a specific machine learning algorithm called Generative Adversarial Networks (GAN, described in this Medium article or in the original paper). The idea of the market as an algorithm to solve a problem is not new. For example one of the best blog posts of all time uses linear programming as the algorithm, giving an argument for why planned economies will likely fail, but the same reasons imply we cannot check the optimality of the market allocation of resources (therefore claims of markets as optimal are entirely faith-based). The Medium article uses a good analogy that I will repeat here:

Instead of the complex multidimensional distributions we have paintings. The "supply" B is the forged painting, the demand A is the "real" painting. Instead of the random initial input, we have the complex, irrational, entrepreneurial, animal spirits of people. The detective is the price p. When the detective can't tell the difference between the paintings (i.e. when the price reaches a relatively stable value because the distributions are the same), we've reached our solution (a market equilibrium).

Note that the problem the GAN algorithm tackles can be represented two-player minimax game from game theory. The thing is that with the wrong settings algorithms fail and you get garbage. I know from experience in my regular job researching machine learning, sparse reconstruction, and signal processing algorithms. So depending on the input data (i.e. human behavior), we shouldn't expect to get good results all of the time. These failures are exactly the failure of information to flow from the real painting to the forger through the detective – the failure for information from the demand to reach the supply via the price mechanism.

An interpretation of neoclassical economics for the left


The understanding of neoclassical economics provided by information theory and machine learning algorithms is better equipped to understand markets. Ideas that were posited as articles of faith or created through incomplete arguments by Hayek and Friedman are not the whole story and leave you with no knowledge of the ways the price mechanism, marginalism, or supply and demand can go wrong. In fact, leaving out the failure modes effectively declares many of the concerns of the left moot by fiat. The potential and actual failures of markets are a major concern of the left, and are frequently part of discussions of inequality and social justice.

The left doesn't need to follow Chris Hayes advice and engage with Hayek, Friedman, and the rest of neoclassical economics. The left instead needs to engage with a real world vision of economics that recognizes its potential failures. Understanding economics in terms of information flow is one way of doing just that.

I must add that the derivation of the information equilibrium condition (i.e. dA/dB = k A/B) is originally from a paper by Peter Fielitz and Guenter Borchardt and applied to physical systems. The paper is always linked in the side bar, but it doesn't appear on mobile devices.
Posted by Jason Smith at 11:30 AM