A new Beveridge curve or, Science is Awesome

What follows is speculative, but it is also really cool. A tweet about how the unemployment rate would be higher if labor force participation was at its previous higher level intrigued me. Both the unemployment rate and labor force participation were pretty well described by the dynamic information equilibrium model. Additionally, if you have two variables obeying a dynamic equilibrium models, you end up with a Beveridge curve as the long run behavior if you plot them parametrically.

The first interesting discovery happened when I plotted out the two dynamic equilibrium models side by side: 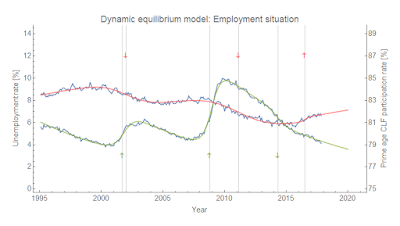 The first thing to note is that the shocks to CLF [marked with red arrows, down for downward shocks, up for upward] are centered later, but are wider than the unemployment rate shocks [marked with green arrows]. This means that both shocks end up beginning at roughly the same time, but the CLF shock doesn't finish until later. In fact, this particular piece of information led me to notice that there was a small discrepancy in the data from 2015-2016 in the CLF model — there appears to be a small positive shock. A positive shock would be predicted by the positive shock to the unemployment rate in 2014! Sure enough, it turns out that adding a shock improves the agreement with the CLF data. Since the shock roughly coincides with the ending of the Great Recession shock, it would have otherwise been practically invisible.

Second, because the centers don't match up and the CLF shocks are wider, you need a really long period without a shock to observe a Beveridge curve. The shocks to vacancies and the unemployment rate are of comparable size and duration so that the Beveridge curve jumps right out. However the CLF/U Beveridge curve is practically invisible just looking at the data: 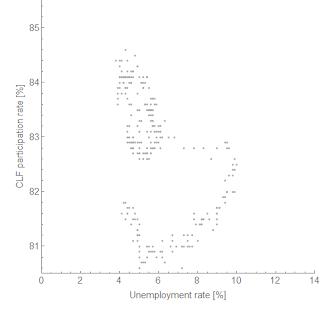 And without the dynamic equilibrium model, it would never be noticed because of a) the short periods between recessions, and b) the fact that most of the data before the 1990s contains a large demographic shock of women entering the workforce. This means that assuming there isn't another major demographic shock, a Beveridge curve-like relationship will appear in future data. You could count this as a prediction of the dynamic equilibrium model. As you can see, the curve is not terribly apparent in the post-1990s data (the dots represent the arrows in the earlier graph above): 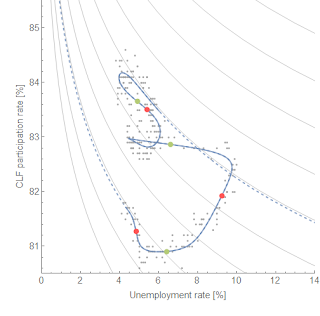 I thought the illumination of the small positive shock to CLF 2015-2016 as well as the prediction of a future Beveridge curve like relationship between CLF and U were fascinating. Of course, they're both speculative conclusions. But if this is correct, then the tweet that set this all off is talking about a counterfactual world that couldn't exist: if CLF was higher, then we either had a different series of recessions or the unemployment rate would be lower. That is to say we can't move straight up and down (choosing a CLF) in the graph above without moving side to side (changing U).

Here are the differences between the original prime age CLF participation forecast and the new "2016-shock" version: 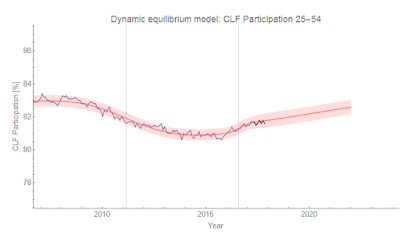 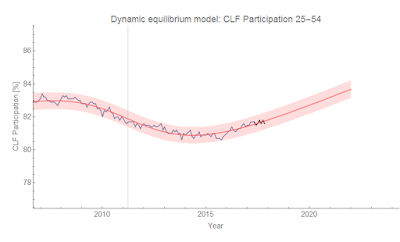