I put up my macro and ensembles slides as a "Twitter talk" (Twalk™?) yesterday and it reminded me of something that has always bothered me since the early days of this blog: Why does the "quantity theory of money" follow from the information equilibrium relationship N ⇄ M for information transfer index k = 2? 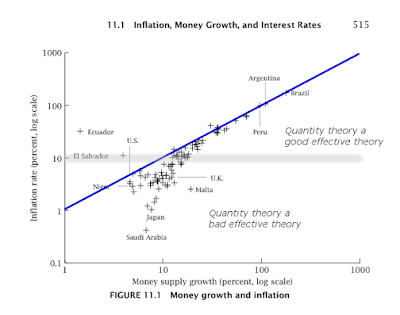 But why k = 2? It seems completely arbitrary. In fact, it is so arbitrary that we shouldn't really expect the high inflation limit to obey it. The information equilibrium model allows all positive values of k. Why does it choose k = 2? What is making it happen?

I do not have a really good reason. However, I do have some intuition.

One of the concepts in physics that the information equilibrium approach is related to is diffusion. In that case, most values of k represent "anomalous diffusion". But ordinary diffusion with a Wiener process (a random walk based on a normal distribution) results in diffusion where the distance traveled goes as the square root of the time step σ ~ √t. That square root arises from the normal distribution, which is in fact a universal distribution (there's a central limit theorem for distributions that converge to it). Another way:

is an information equilibrium relationship t ⇄ σ with k = 2.

If we think of output as a diffusion process (distance is money, time is output), we can say that in the limit of a large number of steps, we obtain

Of course, there are some issues with this besides it being hand-waving. For one, output is the independent variable corresponding to time. This does not reproduce the usual intuition that money should be causing the inflation, but rather the reverse (the spread of molecules in diffusion is not causing time to go forward [1]). But then applying the intuition from a physical process to an economic one via an analogy is not always useful.

I tried to see if it came out of some assumptions about money M mediating between nominal output N and aggregate supply S, i.e. the relationship

Another place to look would be the symmetry properties of the information equilibrium relationship, but k = 2 doesn't seem to be anything special there.

I thought I'd blog about this because it gives you a bit of insight as to how physicists (or at least this particular physicist) tend to think about problems — as well as point out flaws (i.e. ad hoc nature) in the information equilibrium approach to the quantity theory of money/AD-AS model in the aforementioned slides. I'd also welcome any ideas in comments.

[1] Added in update. You could make a case for the "thermodynamic arrow of time", in which case the increase in entropy is actually equivalent to "time going forward".
Posted by Jason Smith at 6:00 PM