The week after the latest unemployment rate data is released, we have the Job Openings and Labor Turnover Survey (JOLTS) data at FRED. I've been tracking these as potential leading indicators of recessions since last summer. There isn't much change in the results, however I do want to start posting the job openings counterfactual shock estimate alongside the hires. In the leading indicators post, I noted that hires seems to experience its shock earlier than other indicators. However I also noted that I have exactly one recession to work with [1], so that should be taken with a grain of salt. With the latest data, the indicator that came second [2] (i.e. openings) seems to be showing a possible shock as well (but the series is much noisier and therefore uncertain).

Here are the two measures with the latest shock counterfactual (in gray):

And here are animations of the evolution of the shocks counterfactuals:

And finally, here are the latest points on the Beveridge curve (also hinting at a shock which would take it back along the path between the 2001 and 2008 labels on the graph): 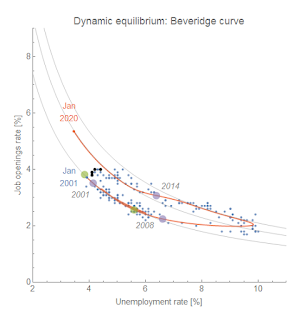 Note that my most recent paper available at SSRN talks about these models and theory behind them.


[1] The JOLTS data series on FRED begins in December of 2000, effectively at the start of the 2001 recession, so only one complete recession exists in the data.

[2] The center and width of the shocks to various JOLTS measures: hires, openings, quits, and the unemployment rate: 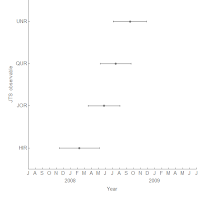