Chris Dillow has a great post about "looking at horses" in economics. The metaphor is from Ely Devons:

"If economists wished to study the horse, they wouldn’t go and look at horses. They’d sit in their studies and say to themselves, ‘What would I do if I were a horse?’"

Nobody saw fit to point out that if you want to know how useful they are, you should look at how actual firms produce actual stuff: do Cobb-Douglas functions describe the real world or not? Again, nobody’s looking at the horses.

It seems in both cases (the tweet thread and in Dillow's post), I was misunderstood: I was defending the general ansatz

not any specific application of the ansatz that exists in economics — with the exception of matching function in search and matching theory. And I was defending it because I was looking at horses. I turns out that if you look at nominal output instead of "real" output, the Cobb-Douglas aggregate production function used in the Solow model is actually remarkably accurate: 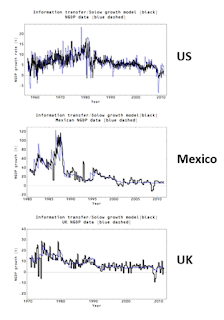 I used this to form the basis of the "quantity theory of labor and capital" that is also empirically accurate.

Now it is true that I defended Cobb-Douglas functions from a theoretical standpoint, but the only reason I was comfortable doing so was because I had already shown it was empirically useful. And it's not only as a production function — but as a matching function as I discuss in my recent paper (with empirically accurate models of unemployment). This is to say that it is not prima facie a bad starting point whenever you have two things combining to create a new thing (labor + capital = output, or job seeker + vacancy = hire). I think a lot of people hear Cobb-Douglas and immediately think of the Cambridge Capital Controversy (which I have solved — kidding). This is unfortunate because the general ansatz is perfectly sound.
Posted by Jason Smith at 6:49 PM