The Atlanta Fed updated their wage growth tracker a few days ago while I was at Coachella, so I didn't have a chance to update it at the time. The post-forecast data continues to be pretty much in line with the original forecast from February 2018 (as always, click to enlarge): 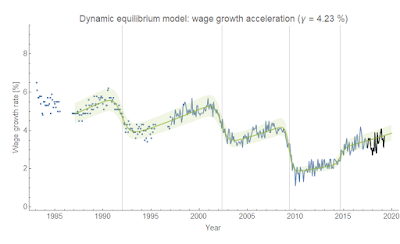 Plus, despite being paid a fraction of what Jan Hatzius of Goldman Sachs is paid, my forecast for the same set of variables is looking a bit more informative than his: 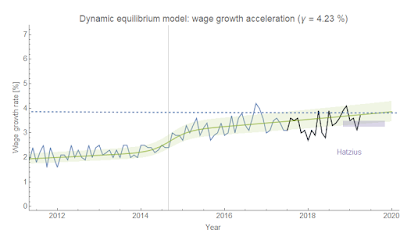 That blue dashed line is the nominal GDP dynamic equilibrium and is part of my "limits to wage growth" hypothesis where nominal wage growth is halted by a recession if it starts to exceed nominal economic growth (and therefore eats into profits on average/in the aggregate). It's a speculative part of the information equilibrium "macro model". We did appear to skirt the edge of it towards the end of 2016 before the data dipped a bit. Given the noise in the data, it is difficult to tell if that was the fading "mini-boom" of 2014 or the beginnings of a genuine downturn that was averted. Job openings was showing a similar downturn at the time that was significant enough (alongside yield curve flattening) for me to posit a coming recession in late 2019 to early 2020 — but might have faded away in subsequent job openings data and revisions. However, the downturn is still present in quits and separations so basically we're still in a situation where only time will tell.
Posted by Jason Smith at 11:30 AM