Here's the latest CPI data (all items, post-forecast data in black) and the dynamic information equilibrium model (DIEM) forecast from 2017: 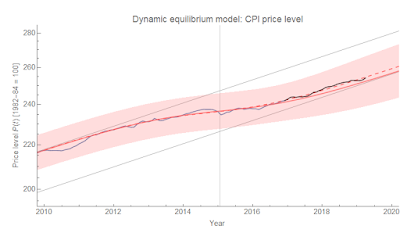 Note that the dashed line is the revised parameters from this post (from one year ago) — but given the revised line falls entirely within the error band it's really a trivial correction (more on this below). Especially when we look at the inflation rate: 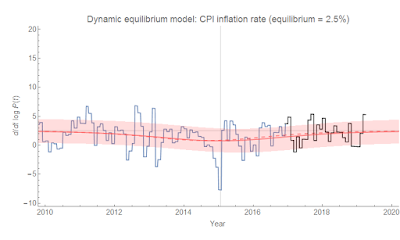 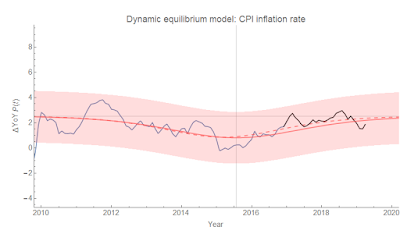 Useless forecasts from the Peterson Institute

When I saw a forecast from the Peterson Institute, I was initially excited to have another model with which I could compare the dynamic information equilibrium model. However, it turns out that not only was it for core CPI inflation (which is far less interesting than headline inflation shown above — it's constant, so I stopped tracking it), but it was also a useless forecast for core CPI inflation (clue and red dashed lines): 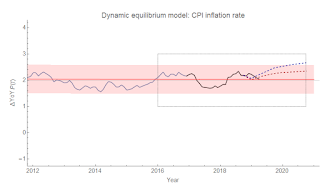 Going by a simple AR process around a constant value of inflation (a model that outperforms the most advanced DSGE models), we should expect an error band due to fluctuations in the data roughly comparable to the DIEM band shown above. That's because the DIEM is actually constant over the post-recession period and the error is estimated by taking the standard deviation of the model residuals — i.e. basically the process for AR process estimation [1].

True, this means the DIEM for core CPI data is also useless [2] — part of the reason I stopped tracking it. In fact, I note that the re-estimation of parameters in the all item CPI was also trivial and it generates an effect comparable to the difference between these Peterson Institute forecasts. But at least I've acknowledged that it's within the noise (and given an estimate of the model error).

But this Peterson Institute forecast? It's such a small deviation, I'd almost think that they made it knowing that it probably couldn't be rejected by the data. It's basically a non-forecast.

[1] Neglecting the little bit at the beginning that effectively tracks the expected mean reversion (as described in a footnote here).

[2] The all item CPI forecast actually showed a tiny improvement over a constant model — but was also related to a lot of other dynamic equilibrium models. But also, the various DIEM models show a great deal of improvement of the error bands (here, here) — bands this Peterson Institute forecast didn't even give us.