CPI data and the end of "lowflation"

The latest CPI data is out for the US, and I think it's looking like the recent shock (2014-2015) parameters were a bit off (since it was still ongoing at the time). While this has negligible effect on the continuously compounded annual rate of inflation (instantaneous logarithmic derivative), it produces a noticeable effect (within the error) on the level and when measured year-over-year [1]. Here's the instantaneous inflation measure: 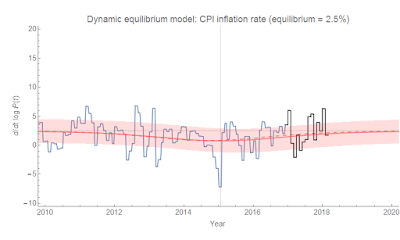 And here are the year-over-year and level measures: 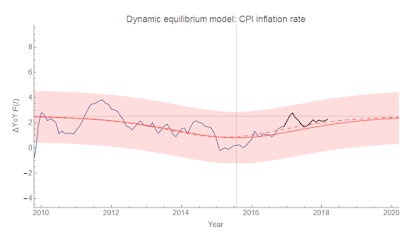 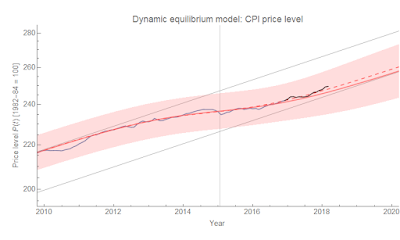 The original estimates of the shock parameters were


That b₀ corresponds to a duration of 4.4 + 1.4 years, which means the shock was still ongoing when the forecast was made in early 2017. The new estimate (shown as a dashed line in the graphs) has parameters


which are all within the error bars on the original estimate (the new errors are all approximately cut in half as well). So we can see this as a true refinement. This new b₀ corresponds to a duration of 4.1 + 0.9 years. The shock "began" (inasmuch as you can cite a "beginning") in late 2012 or 2013 and "ended" in late 2016 or 2017. This period of "lowflation" is associated with the negative shock to the labor force after the Great Recession and appears to be ending (or has already ended as of last year per these new parameter estimates).