While women entering the work force was the larger effect (almost doubling from 30% in the 1950s to almost 60% at its peak), another social transition was the increase in black labor force participation after the anti-discrimination laws of the 1960s. 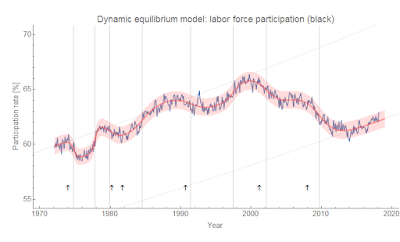 The other noticeable effect is the labor force bump comes before bumps in inflation [3]:

This provides further evidence that inflation may be a phenomenon of the labor force (i.e. not monetary), and its recent sub-target performance may be due to the end of the demographic transition and its concurrent increase in labor force participation.


One of the things I found interesting about modeling this data is that the entropy minimization process was not completely conclusive: 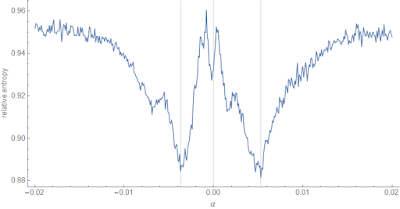 One minimum is lower than the other, but the resulting model — while simpler — makes less sense than the one described above. 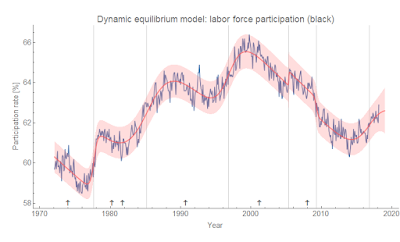 Black labor force declines in this version are endemic, and it's only kept from falling to zero by booms that come between recessions. Recessions effective end these booms and return black labor force participation to its typical state of decline. This would be hard to reconcile with basic intuition (shouldn't labor force participation flag after a recession?), but also impossible to reconcile with the relative similarity in the structure of black and white unemployment rates.

That's why I chose the other minimum despite it being only a local minimum, not global.

[3] This would predict a positive shock in labor force participation in the early 70s before the beginning of the available data.
Posted by Jason Smith at 4:00 PM