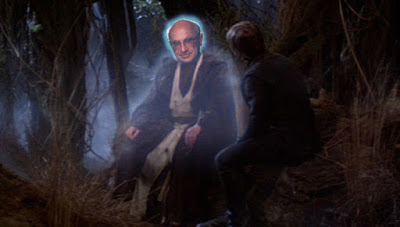 [Milton Friedman appears as a force ghost dressed as a Jedi from behind some foliage.]

Milton: I see you haven't heard my thermostat argument! Imagine a car ...

Milton: [Undaunted] ... driving on a hilly road trying to keep the same speed. If the driver was really good, the speed on the speedometer would be constant and you'd see the gas pedal go down and up in perfect correlation with the hills. But what you wouldn't see is speed changing — it'd be uncorrelated with the hills and the gas pedal.

Jason: Wait, is this a speedometer or a thermostat?

Jason: Ok, but how did we figure out looking at the gas pedal was important?

Milton: This isn't about whether we know about the gas pedal. We could be ignorant of the gas pedal — the point is that the model could exist!

Jason: So assume a complex model relationship between gas and speed when there appears to be no correlation?

Jason: Sounds kind of like the opposite of Occam's razor to me. I think I'll stick with Occam.

Milton: Wait, I mean no! Anyone can see monetary policy affects inflation.

Jason: In fact, data seems to show a definite change in behavior around 10% inflation, which is remarkably close to the time scale between recessions ... [trails off, staring up at the sky]

Milton: Look, you. We have lots of evidence that monetary policy affects inflation.

Jason: Awesome! Why didn't you just show me that evidence instead of basically telling me that Occam's razor isn't always right? I mean, Occam's razor is a heuristic, not a theorem ... of course it's not always right. So are the models built using this evidence pretty good at forecasting, then?

Milton: Here you go! All the evidence that monetary policy affects inflation!

Jason: Thanks, wow! Why didn't you just show me this in the first place?

Milton: I wanted to teach you about the thermostat! 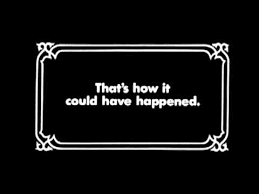 But here's what really happened ...

Milton: You see, you won't be able to tease it out of the data. Imagine the Fed is a thermostat keeping a constant temperature ... the turning on and off of the heater is going to be completely uncorrelated with the temperature inside the house.

Jason: That's the same argument as the speedometer. Are you just trying to get out of showing me evidence because you don't have any?

Milton: You see, what I said is true ... from a certain point of view.