Personal consumption expenditures and other data

The various components of Personal Consumption Expenditure (PCE) data came out today (here it is on FRED). One thing that the data revisions have done is made the hypothesized shock at the end of 2017/beginning of 2018 due to the TCJA in the dynamic information equilibrium model (DIEM) narrower (i.e. shorter duration) — but integrated it is about the same, it's just a bit higher for a shorter period. Here are the graphs of the level and rate (click to enlarge):

PCE tracks GDP fairly closely (in fact, they're almost informationally equivalent), so this gives us a hint as to how Q3 GDP will come out. However, both are lagging indicators of recessions, so this doesn't shed any light on US economic weakness either way.

The rate of change of the price level of PCE excluding food and energy, aka core PCE inflation, also has been consistent with the DIEM forecast since I started tracking it over two years ago: 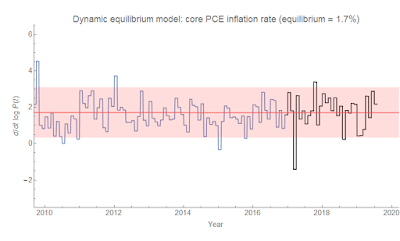 There's been a lot of new about bond yields and fluctuations in the stock market these past couple weeks, however the story remains for the most part the same. Here's the 10-year rate forecast from four years ago that's still doing well — the rate dove down close to the lower edge of the expected fluctuations but is still consistent with the information equilibrium (IE) forecast: 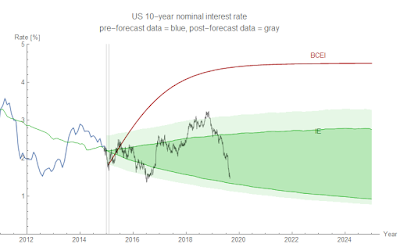 BCEI is the Blue Chip Economic Indicators forecast (in red) of the same vintage. It's done ... poorly.

The other interest rate I've been tracking is Moody's AAA rate, for which the daily observation is now at the lower edge of the fluctuations in the monthly average band: 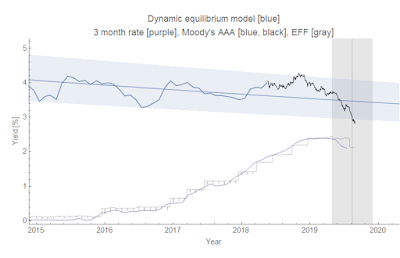 That gray vertical band is the estimate from here of the recession onset relative to yield curve inversion (using the median of multiple spreads, which turns out to be remarkably close to the principal component [1]). I've added monthly averages to the figure (in orange) because the various indicators were computed using monthly averages, not the daily data (red) which is just for tracking purposes: 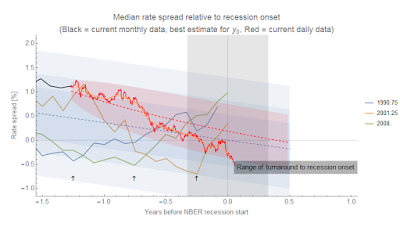 The daily data has entered the range of the lowest spread observed before a recession for the past three recessions, so the monthly average will probably be close. The recession onset once hitting this lowest point was between one and five quarters since the 90s in the US. Note that this is not a rigorous analysis, just a comparison of against the prior three recessions for context.

Speaking of comparisons against prior recessions that aren't rigorous but rather just context, here's the S&P 500 forecast from two and a half years ago overlaid with a counterfactual shock comparable to the 2000 recession shock: 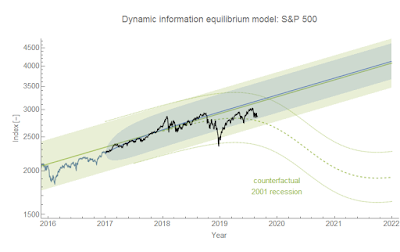 The post-forecast data is in black. As we can see, the data is falling consistently below the center prediction, but is still within the error band (the errors tend to be correlated in the short run, but longer run are closer to normally distributed).

As a side note, I've often encountered detractors that say the error bands on these forecasts are quite  large. However, despite their considerable size, they represent separation between predictable trend and unpredictable human behavior. The probability that someone is selling you snake oil (or insider information) rapidly approaches 100% as the error bands tighten from roughly this size. There's only so much that is knowable about a complex adaptive system.