Analyzing the EU with the information transfer model

Today I analyzed the EU with the information transfer model and produced the analogous graphs from this post (the price level), this post (interest rates) and this post (interest rates, the liquidity trap and the information trap). The monetary base data came from here and the GDP, GDP deflator and interest rate data came from FRED. Altogether the story is similar to the US and Japan. The EU is in an information/liquidity trap. The interesting result is that this tests the hypothesis that the zero lower bound is not a necessary requirement to be in the trap. Scott Sumner frequently points out that the ECB is not at the zero lower bound (rates are at ~1%) as an argument against Paul Krugman and the liquidity trap. However, this analysis shows that the "liquidity trap" interest rate is almost 2% in the EU (in Japan it is 1% and in the US it is 0.1%).

First I will start with the price level fit (model in blue, GDP deflator data in green): 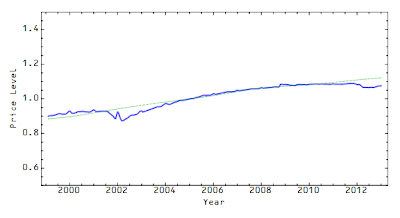 For reference, here is the information transfer index (quite high since the Euro's inception): 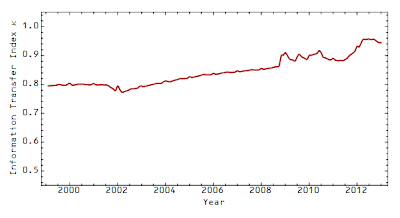 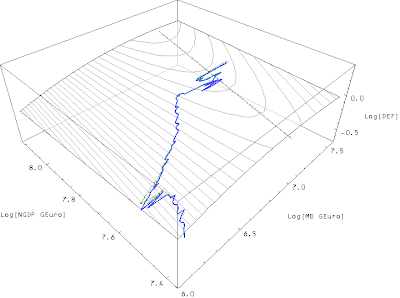 Now we come to the interest rate models. I used the discount rate, which roughly tracks the 3-month rate. There are probably some issues -- the ECB (and markets) seem to treat Greek debt differently than German debt so there is no overall "EU" rate -- but the fit does a decent job anyway (discount rate in green, model calculation in blue): 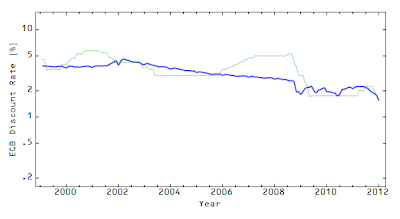 The money-graph behind the bold claim at the top of this post is last. The constant interest rate contours in (MB, GDP) space are shown as red lines, the information/liquidity trap criterion is shown as a black line and the path followed by the empirical data is shown in blue. The key takeaway is that the "liquidity trap" rate (given by the location of the black line given the current level of GDP) is almost 2%: 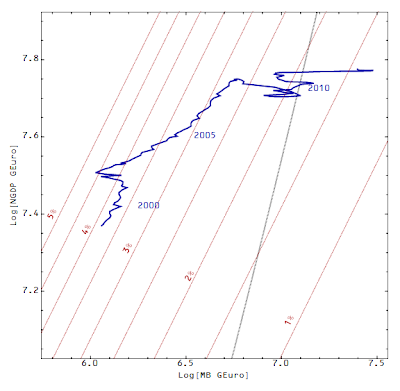 
I'd like to point out that the first graph is a non-trivial result; the Euro monetary base does not have a immediately obvious relationship with the price level: 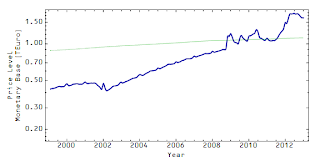