I refute it thus

I posted a comment on Sumner's post about the difference between money as a medium of exchange and money as a unit of account. His response was: As far as QE [is concerned], it’s well understood why there is little inflation. We don’t need new models.

I'd like to see this model. I assume by the tone of the blog that it's not Krugman's liquidity trap model [pdf] and it has something to do with expectations. In his short course on money, Sumner has segment about expectations, which are apparently awesome:

Unfortunately the role of expectations makes monetary economics much more complex, potentially introducing an “indeterminacy problem,” or what might better be called “solution multiplicity.” A number of different future paths for the money supply can be associated with any given price level. Alternatively, there are many different price levels (including infinity) that are consistent with any current money supply.

Indeterminacy problem. So your model describes what actually happens equally as well as an infinite number of things that didn't happen. Sounds like a success to me.

Before we got to this happy point where expectations can describe whatever we want, Sumner says that it's hard to say if the lack of inflation is actually more IOR or expectations. We now have one tool that does whatever we want and another tool that seems like a realistic mechanism until you see that a 0.25% IOR should probably have a hard time hold back a doubling of the monetary base. I could see that 0.25% IOR holding back on the order of 1% inflation. But Sumner is actually unclear on the extent it is expectations versus IOR:

It’s not clear the extent to which the recent low inflation in the US reflects this factor [a government injects large quantities of money into the economy, but tells the public that it will be removed as soon as there is any sign of inflation], and how much reflects the 2008 decision to pay interest on reserves.

Apparently the same expectations mechanism is operating in Japan.

This occurred in Japan between the early 2000s, when lots of base money was injected, and 2006, when the monetary base was reduced by 20% in order to prevent inflation from occurring. 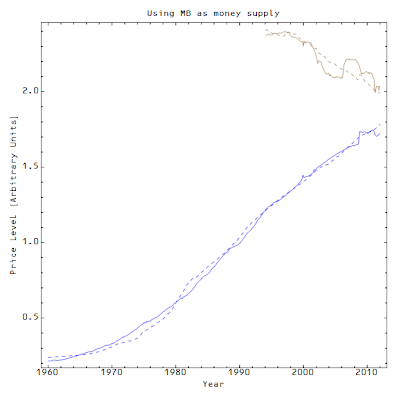 In my opinion, this is far superior to "monetary policy rules except for and because of expectations". Maybe the answer should be that the lack of inflation from QE is well understood ... with an information transfer model. No expectations required.
Posted by Jason Smith at 9:45 PM