Exit through the hyperinflation

I updated the graphs at this link. It doesn't change any of the conclusions, so I'll leave this post unchanged.

In the last post I mentioned that I would look at accelerating inflation as a potential way to exit from a liquidity/information trap. First let me start with interest rates. The information framework describes the effective fed funds rate very well from the 1960s onward. In order to look at even earlier times, I looked at the 3-month interest rate instead (which is approximately equal to the Fed funds rate, and is shown in green) and added a few points I managed to get from a Fed paper on the Depression for the years 1929-1931 (green dots). Even without re-fitting the data to the entire 1929-2013 period (fit only to 1960-2013), I got a remarkable fit: 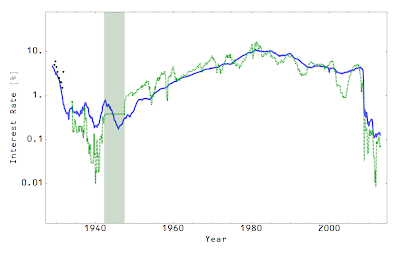 The model result is shown in blue. There is no "information trap" in the interest rate market model r:NGDP→MB, (NGDP standing in for aggregate demand, and MB being the monetary base) just a zero lower bound problem (they can be related in the sense that they happen at the same time).  Therefore the same parameters can be used for interest rates across the phase transition between the Depression and Post-WWII periods. However, if we look at the interest rate data we see the first sign of how a central bank can exit a liquidity/information trap and usher in that phase transition. In the highlighted region in the graph (World War II and afterwards), you can see the Fed pegged interest rates. That is key to leaving a path given by a market-based monetary policy and induces hyperinflation (or just accelerating inflation). In the information transfer framework, that is incorporated going from a floating, market-adjusting information source i.e. aggregate demand and destination i.e. money supply to a floating, market-adjusting information source and a constant, market-ignoring information destination.

This all means we need to use different models to form the complete story. We have P:NGDP→MB with market MB before WWII, statist MB during WWII and a return to market MB after WWII. In the graph below, I fit the models to the data before (red) and after (blue) WWII (from this post). The new result is adding the piece in the middle using the accelerating inflation model (purple):

This is a much better description than the original phase transition model. Since the 3D price level diagram includes what are basically three distinct models, they don't represent a single surface. I've shown them as patches in this figure (with the empirical data shown as a blue line): 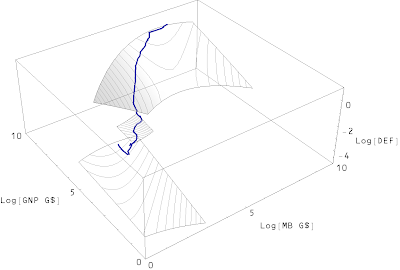 One additional interesting result is that it is possible this non-market/statist/constant information destination (money supply/central bank) continued until the 1980s, at least in terms of the price level. One thing to recall is that the Federal Reserve Act was amended in the 1970s to include inflation as part of a dual mandate. With that legislation the market P:NGDP→MB goes from having a non-market information destination to a market destination. Why do I include this possibility? Well, the accelerating inflation model works well all the way up to the 1970s if you let it:

Although in that case the fit no longer works during WWII.

What does this exit via accelerating inflation picture mean for the US today? Well, it appears as though the Fed could peg interest rates a given time period (say, 10 years), markets be damned, and we would leave the liquidity/information trap. This rate doesn't even have to be zero as far as the model goes -- it could be 3%. That would be illegal (because of the dual mandate) so Congress would likely have to amend the Federal Reserve Act. This is politically impossible right now, so we're probably doomed to a Japan-like lost decade or two.
Posted by Jason Smith at 4:28 PM