Secular stagnation and the EU


Saying everything everyone is saying is explained by your model is probably one of the surest ways to prove that you are some sort of crackpot and ergo your model is the ravings of a lunatic. But! Everything everyone is saying is explained by my model. (And the things Scott Sumner said about nails in the Keynesian coffin are wrong; you don't need to be at the zero lower bound to be in a liquidity trap and switching to a new data series that agrees with your preconceived notions is bad methodology. And is it just me or is the first thing that comes in your head when you hear "GDP-plus" is milk-plus?)

1) Secular stagnation is the diminishing marginal utility of monetary expansion

As countries have tended to use monetary policy to increase economic growth without generating too much inflation, the result has been that most countries are on a path towards diminishing marginal utility of monetary expansion. Central banks set about expanding the monetary base to capture all the economic growth (information) they can. Eventually additional monetary units ("bits") stop allowing you to capture more information and instead mean each monetary unit captures less information relative to the size of the economy. In this diagram you can imagine the US in the 1970s on the left side and today on the right side. Or Brazil on left side and Japan on the right side. (You could even imagine the quantity theory of money being a more accurate description on the left side and the IS/LM model being more accurate on the right [1].) 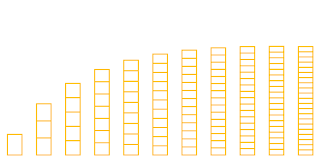 The result is a price level that flattens out (low stable inflation) or even goes negative (Japan). As the price level determines the level of employment given NGDP (due to sticky wages), you end up with stagnation. The way out is probably via accelerating inflation (hyperinflation) which re-adjusts the size of NGDP relative to the monetary base.

UPDATE: I wanted to make the point that this is purely a monetary/economic issue (efficiently capturing the information in an economy with a monetary system) and has absolutely nothing to do with technological innovation or investment. We could invent warp drive today and this wouldn't help. Read Cosma Shalizi on how markets are a particular way to solve an optimization problem (as part of a review of Red Plenty). Then imagine the monetary system as the number of bits you devote to solving that optimization problem. Initially, they help a lot. Later on, you reach some real bottlenecks that have more to do with the dimension of your problem than your resources.

I've updated the graph for the EU price level (data in green, model in blue) and it shows the price level is approximately flat, i.e. inflation should be near zero. 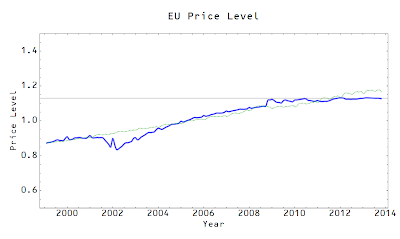 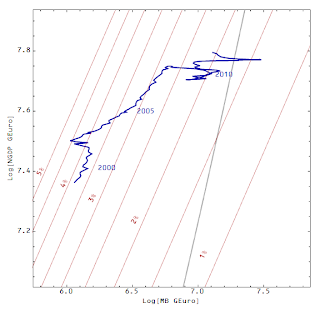 4) If information transfer is correct, then Keynesian solutions are the only viable solutions

If we are in secular stagnation as a result of coming close the point where ∂P/∂MB = 0, then, quite literally, ∂P/∂MB = 0 so that we can only use the fact that ∂P/∂NGDP ≠ 0 or the Keynesian subset ∂P/∂G ≠ 0 to generate inflation and therefore jobs (because of sticky wages). The other possibility is hyperinflation.

[1] Techincally, the IS/LM model always works to a degree of accuracy, say 10% error, while the traditional quantity theory of money goes from 1% error to 100% error from the left side to the right side of the graph.