Krugman, Keynes and the liquidity trap

There was some lively discussion in the comments on this post about the liquidity trap. I realized 1) I hadn't worked out the details of what happens in the information transfer model to the level of detail of that post and 2) I found the liquidity trap model from Krugman's 1998 Brookings paper to be essentially mute on the reason I wrote the post in the first place: I wanted to find out if the ECB raising rates in 2011 or keeping them above zero after 2008 had anything to say about the efficacy of monetary policy or monetary offset.


To that end, I thought I'd try to reproduce the IS curve with the information transfer model (ITM). The results were pretty neat, and they follow in a long line of IT model results where everyone (monetarists, Keynesians) is correct but only in at certain times.


I started from this post and looked at the effect of monetary expansion (red arrows in the graph on the left below) on the interest rate (red lines). The model also incorporates the impact of monetary expanion on the price level -- it's a highly nonlinear system. The "information trap" criterion ∂P/∂MB = 0 is represented as a dotted line. At this line is where monetary policy has no impact on the price level or nominal output -- effectively the liquidity trap Krugman describes in his 1998 paper. I sampled points given by the rainbow dots in the graph below on the right (and the colors correspond in the rest of this post as well). 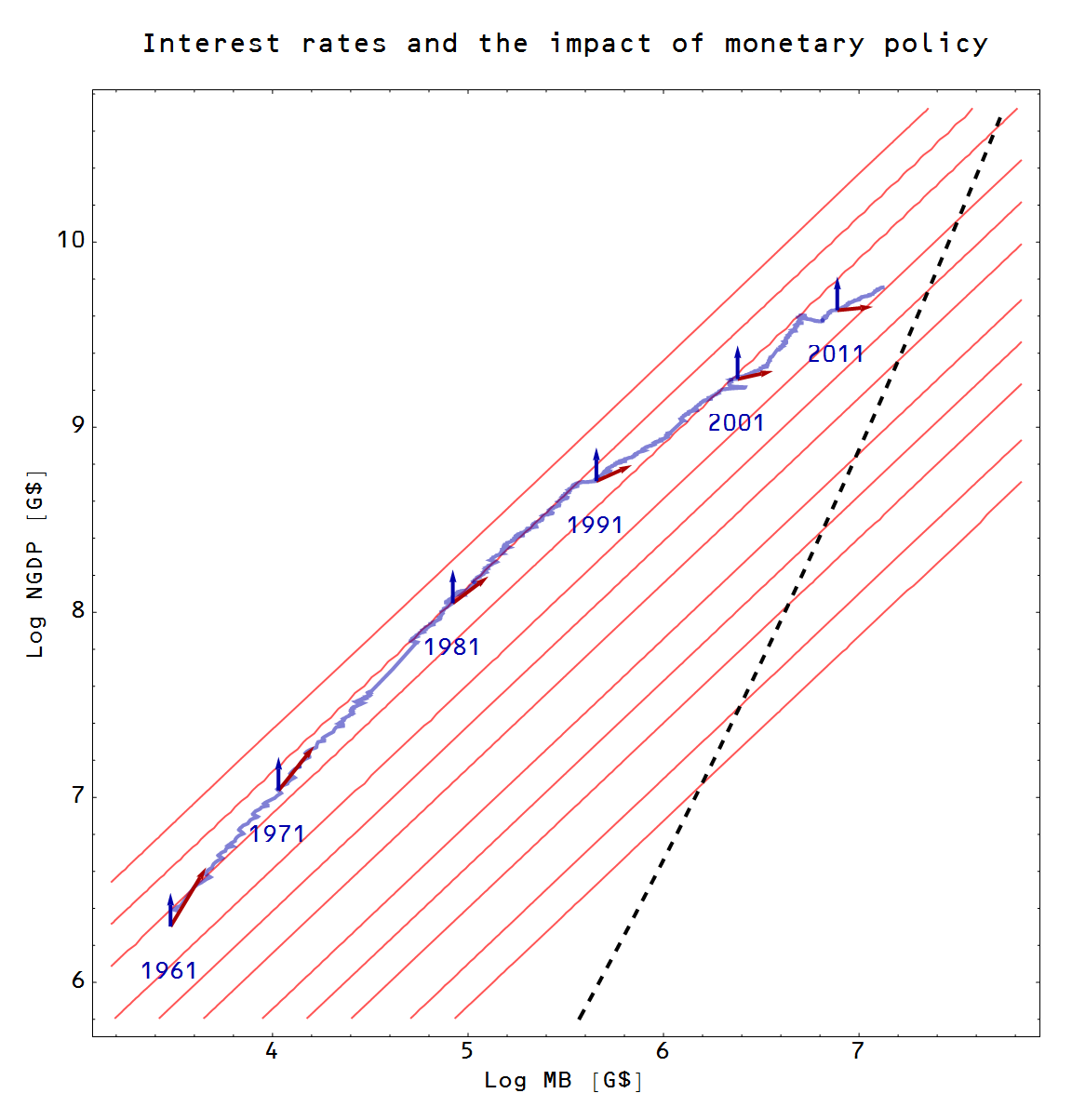 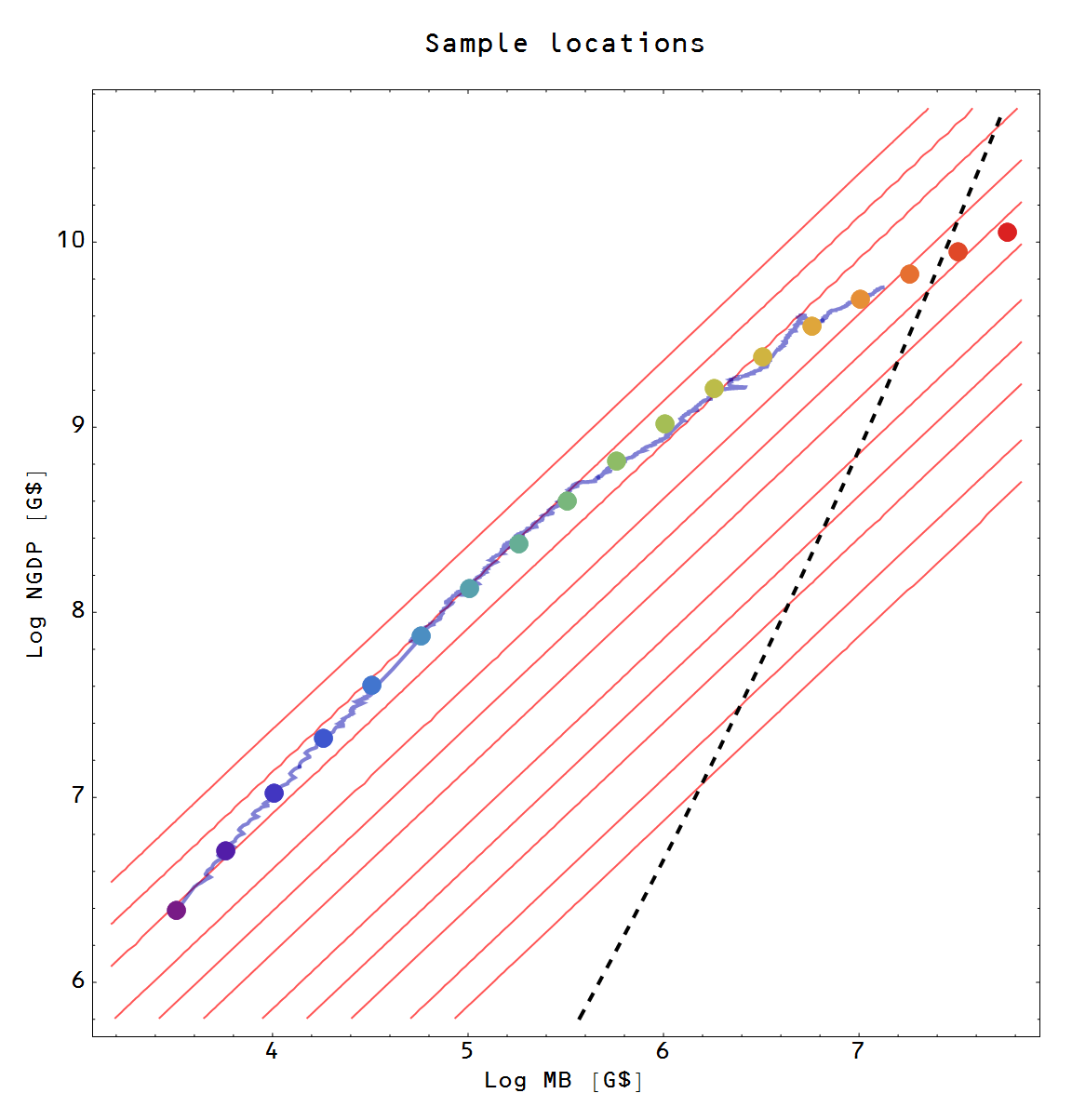 At each of the points in the graph on the right above, I evaluated the interest rate and nominal output (NGDP) for various values of monetary expansion (and contraction) and used those values to trace out an IS curve (interest rate vs output). One difference from Krugman is that I used nominal output instead of real output. I did run the numbers for real output, and the results were basically the same, but the graphs didn't look as nice. Maybe I'll put them in a follow up.

Here was the result: 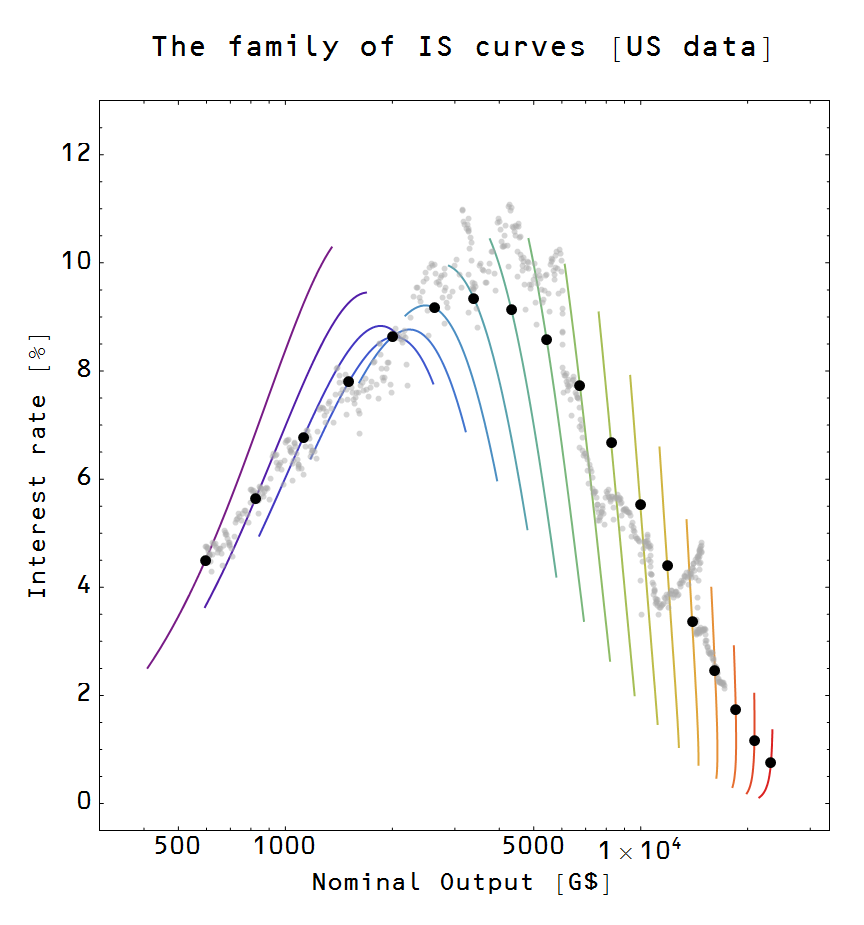 The black points on the rainbow curves represent the starting value and the curves trace out monetary expansion and contraction. The gray points represent data from the US. Note that the curves are not required to follow the data exactly; one way to think of the curves is as the effect of steering the economy by central bank near the given point, but things like population growth steadily moves the economy to the right. However, when the points do follow one of the curves closely, that gives an indication of how much power monetary policy has over the economy. In the graphic below, I show each curve in a normalized window (+/- 30% of the center value) that gives a better view of the changing IS curves over time: 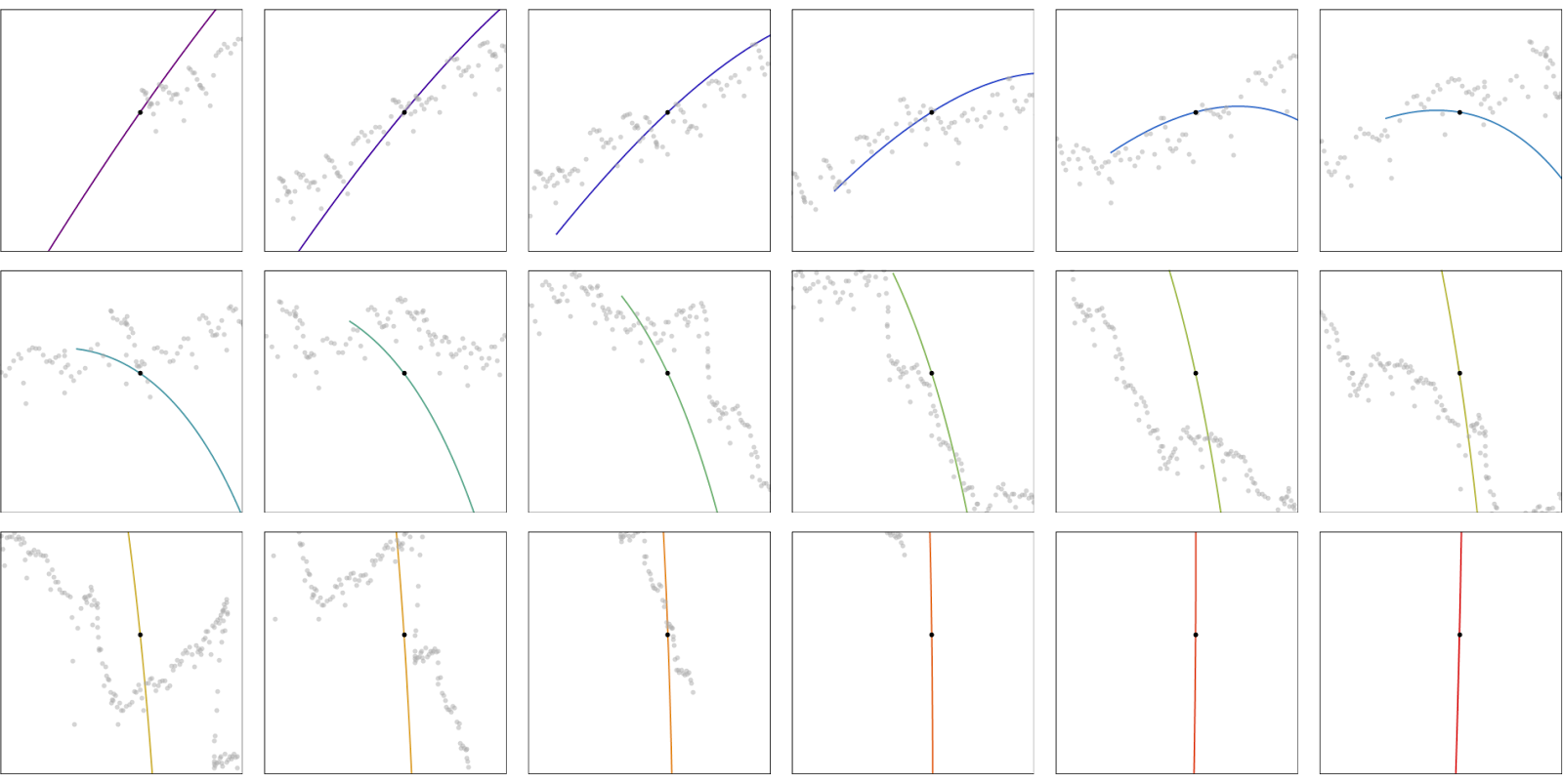 
This answers two questions. First, the non-zero ECB interest rates (and raising or lowering them) probably had no monetary impact (they might have had a fiscal impact on the member states). This is how I interpreted the liquidity trap in the earlier post. Second, the economy doesn't need to be at the zero lower bound (ZLB) to experience a liquidity trap -- but it does have to have "low" interest rates close to the information trap criterion line in the graphs at the top of this post. This is the connection with Keynes -- the original liquidity trap he describes does not have to occur at the ZLB.


But what actually happens at the ZLB? We can use the last two red/orange graphs in the series if I show them with a linear scale: 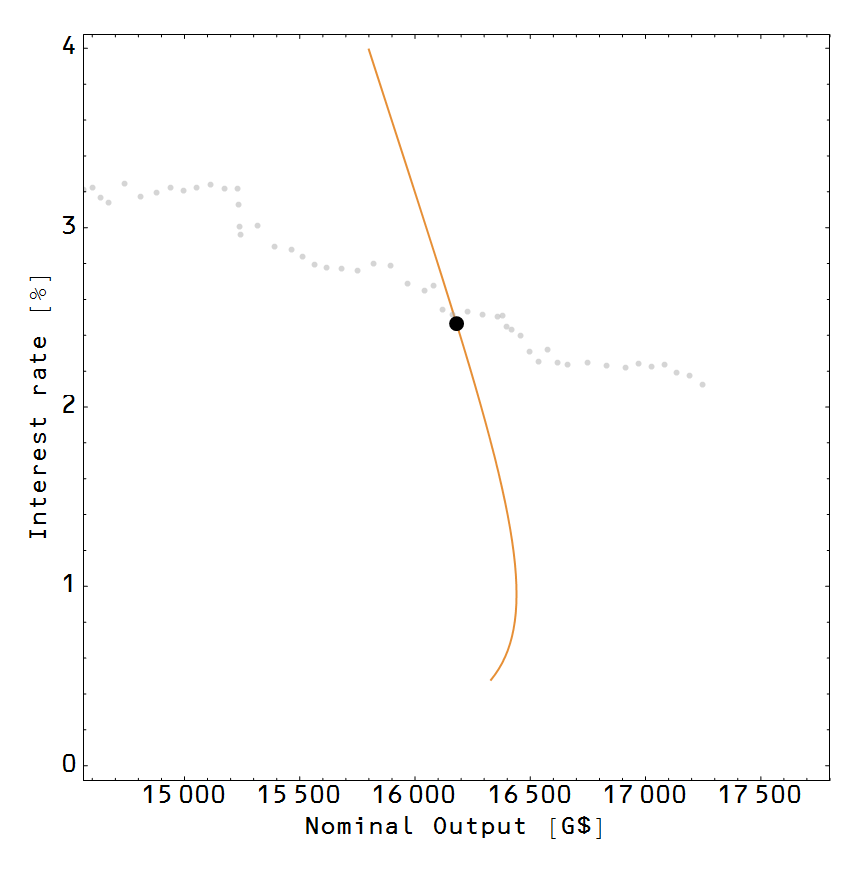 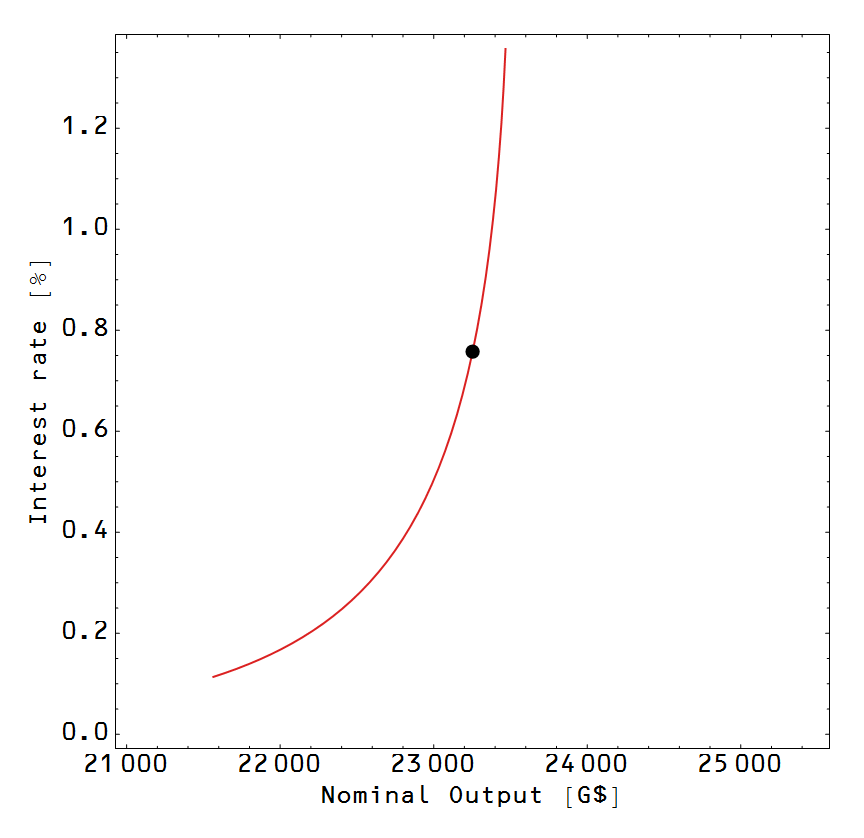 It looks like pushing a piece of uncooked spaghetti against the countertop with the spaghetti bending away. Pushing down towards the ZLB produces a negative impact on NGDP i.e. "deflationary monetary expansion". Notice that there is actually a peak output for the curve on the left -- I imagine this is Krugman's point 2 in Figure 2 in his paper. In fact, here is one of the IS curves derived here (blue) alongside a schematic of the "traditional" IS curve (dashed) from e.g. Krugman's 1998 paper (along with the labels from that paper): 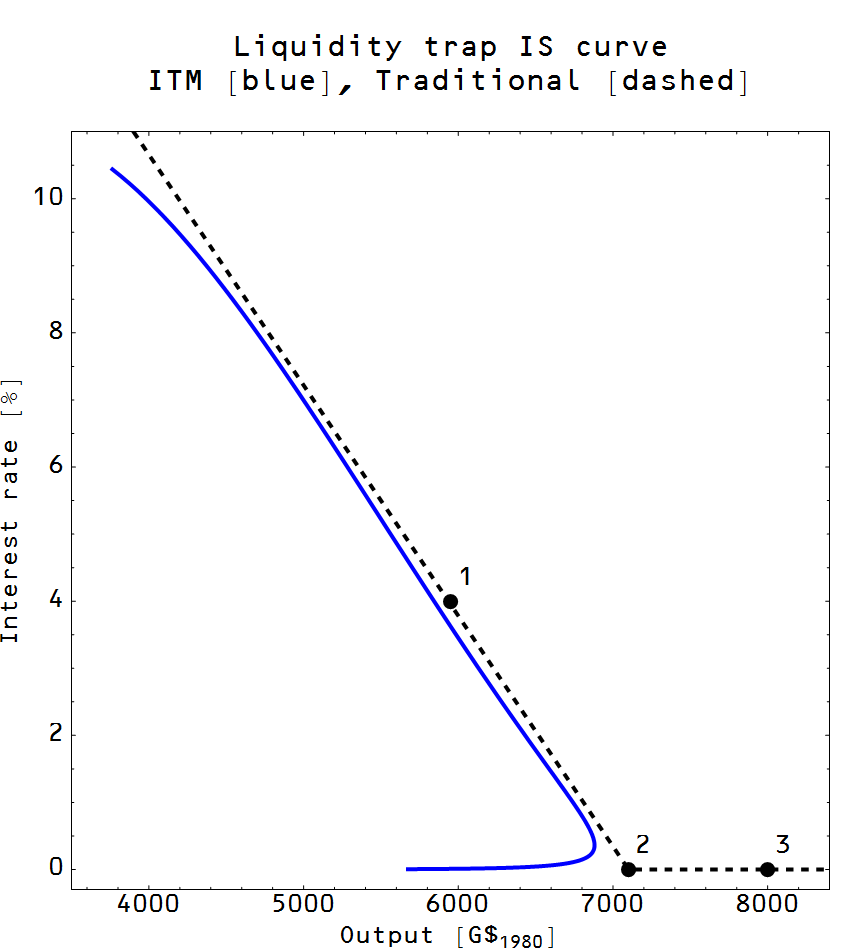 This a possible resolution of the discussion I was having with Mark Sadowski in comments on the earlier post.
Posted by Jason Smith at 6:25 PM