In defense of equilibrium

I signed up for the comment updates at John Quiggin's post and they have been flooding in for the past couple days. I would like to say that the comments are very thoughtful and erudite (i.e. spelled correctly). Crooked Timber seems to have that effect. One thread that was pervasive was discussion of equilibrium, in particular a reference to Krugman's blog post where he describes "useful economics":

"So how do you do useful economics? In general, what we really do is combine maximization-and-equilibrium as a first cut with a variety of ad hoc modifications reflecting what seem to be empirical regularities about how both individual behavior and markets depart from this idealized case. And people using this kind of rough-and-ready approach have done really well since 2008, on everything from inflation to interest rates to the effects of austerity."

Now the definition Krugman is using here is effectively the "ADM" equilibrium -- there exists a set of prices so that excess demand is zero (or, there exist a set of prices that clear the market). It is important to keep that definition in your head though the rest of this post, because many comments seemed to see this as some sort of shocking revelation that the entire edifice of economics was based on a massive logic fail. For example:

"As an operational model, maximization-and-equilibrium isn’t ideal — it doesn’t make any sense at all. In a world of radical uncertainty, where people do not know what they do not know, 'maximization' can not defined. 'Equilibrium' is even more vacuous — in practice, it comes down to what pedants call, the ergodic hypothesis, a crazy idea that history doesn’t matter — particularly when you consider that capitalism is one strategic investment after another in making history matter."

Strategic investment is "maximization", so I'm not sure what that's all about. Plus the other side of that "investment" is losing out and so there's your egodicity. Snark aside, in the past history has not seemed to matter -- at least with regard to economic variables. The economy appears to return to a long run trend (Milton Friedman's plucking model). This has been a major debate: does RGDP growth have unit root? The argument is inconclusive based on the data alone and you need to assume and underlying economic model in order to say whether the ergodic hypothesis holds or fails. You can't just claim ergodicity is crazy without specifying a model. In the information transfer model, the "ergodic hypothesis" seems to hold. That is evidence that if ergodicity appears to be crazy in your model, then your model is likely crazy.

These are the comments that set me off though, pushing me to become the non-economist champion of the besieged economists:

"By hammering at equilibrium no matter how often it fails to map our experience with the world, academic orthodox Econ simply refuses to notice a problem."

"... equilibrium (demand equals supply) is probably not a good way to understand a dynamic, chaotic, system characterized by violent reversals."

These comments seem to suffer from availability heuristic -- only the newsworthy economic events seemed are the valid subject of scientific economic inquiry.

And in their defense, there aren't many news stories on Bloomberg where supply met demand through the price mechanism yet again. Even the massive failure of macroeconomic management that was the great recession seemed to only shave about 3.5% off of NGDP. That's right -- about 96.5% of transaction value (more than 14 trillion dollars) was basically unaffected. Bloomberg disproportionately fixated on the 3.5%; so do we all.

And how many violent reversals have you seen in the price of bacon? And food is one of the more volatile prices out there -- hence why "core CPI" leaves out food.

The attacks on economists only get more confused:


"One of the worst ideas ever is that of economic equilibrium to which things return. Better would be a sense of history and a realistic view of the world we live in. Exponential growth cannot continue forever. But capitalist economies have relied on that from the beginning."

I actually have a related discussion here. Before you jump on the fact that I say that equilibrium does not exist, note that I am referring to a specific equilibrium: constant inflation and constant interest rate over the long run.

Anyway, an equilibrium in the economics sense is not some status quo to which things always return. It is (remember the definition) a set of prices where aggregate supply meets aggregate demand, i.e. clear the market. I'd say that's pretty realistic view of the world seen with a sense of history: I don't see a lot of excess demands in the US (except traffic, which is a failure of the price mechanism on the scarce supply of roads at a given time) and there aren't a lot of excess supplies (except maybe in some cases of government subsidies for corn and wheat).

"The more I read about equilibrium analysis the more I couldn’t believe that anyone would begin to imagine it might say something interesting about human behavior. What was worse, I found out that in practice, nobody could point to an example of a equilibrium model that matched the data."

This is where the madness creeps in. All I could say to this is: Really? Does this commenter go out to the supermarket thinking the price of bacon will suddenly be 30 times as much one day and half as much the next, with bacon filling the entire grocery store? We operate every day with prices that are roughly the same as yesterday's and that most products you bought yesterday will be on the shelves again today. The whole concept of a price system without massive surplus or shortages, e.g. a supermarket, is a prediction of equilibrium! I should be careful. Maybe that commenter lives in Somalia and is trying to use bitcoin.

Sure there is a trend towards higher prices (inflation), but that is not inconsistent with equilibrium -- if the trend is set by monetary policy, then that trend represents equilibrium and prices return to that trend assuming there is not some massive supply or demand shock.

Another (snarky) way to put it is that a naive market equilibrium employment rate is predicted to be 100%. The current value? 93.7%. Here is a graph of the naive equilibrium model and the slightly improved natural rate model: 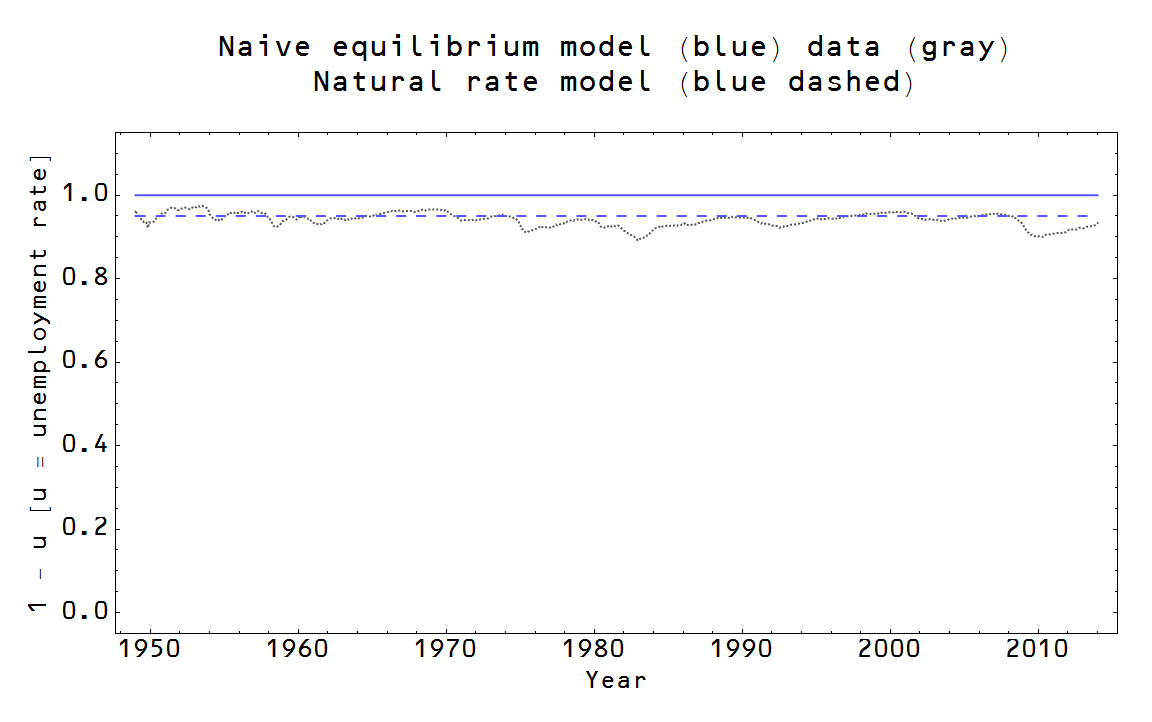 Economists don't tend trot this plot out (maybe they should?) because they're more interested in the deviations from equilibrium. It's actually rather amazing that the model should work this well!


"Back in the day, to derive an equilibrium analysis, you had to find a constraint, such as a conservation law."

While I definitely sympathize with this approach (see e.g. here), this is a very narrow definition of equilibrium. For example, this leaves out ecological equilibria (maybe there is some as yet undiscovered conservation law?) or the global climate thermal equilibrium (which is actually a product of a non-equilibrium system).

Sure the Phillips curve seemed to break down forming the basis of the Lucas critique (that says, in this framework, maybe empirical regularities aren't the way to go about discovering those constraints), but as Paul Krugman points out -- this process of identifying a constraint and deriving and equilibrium analysis is exactly how Krugman says economists go about doing useful economics.

[1] Noah Smith has an excellent takedown of a physicist (shame!) who I am a a single degree of separation from (more shame!) making the same clumsy claim as the commenter, that exponential growth has to stop.
Posted by Jason Smith at 7:14 PM