Notes from Ben Bernanke and the P* model

In doing the research for my post today I came across this speech from Ben Bernanke in 2006. He references an inflation model that uses M2 called P* that made it to the front page of the NY Times. In the speech, Bernanke tells us that M2 was growing too slowly:

Unfortunately, over the years the stability of the economic relationships based on the M2 monetary aggregate has also come into question. One such episode occurred in the early 1990s, when M2 grew much more slowly than the models predicted. Indeed, the discrepancy between actual and predicted money growth was sufficiently large that the P* model, if not subjected to judgmental adjustments, would have predicted deflation for 1991 and 1992.

He had noted earlier in the speech that M1 also broke down (so people became more interested in M2):

For example, in the mid-1970s, just when the FOMC began to specify money growth targets, econometric estimates of M1 money demand relationships began to break down, predicting faster money growth than was actually observed.
...
Problems with the narrow monetary aggregate M1 in the 1970s and 1980s led to increased interest at the Federal Reserve in the 1980s in broader aggregates such as M2.

Unfortunately, forecast errors for money growth are often significant, and the empirical relationship between money growth and variables such as inflation and nominal output growth has continued to be unstable at times.

So how well does the P* model do? This is from the Cleveland Fed: 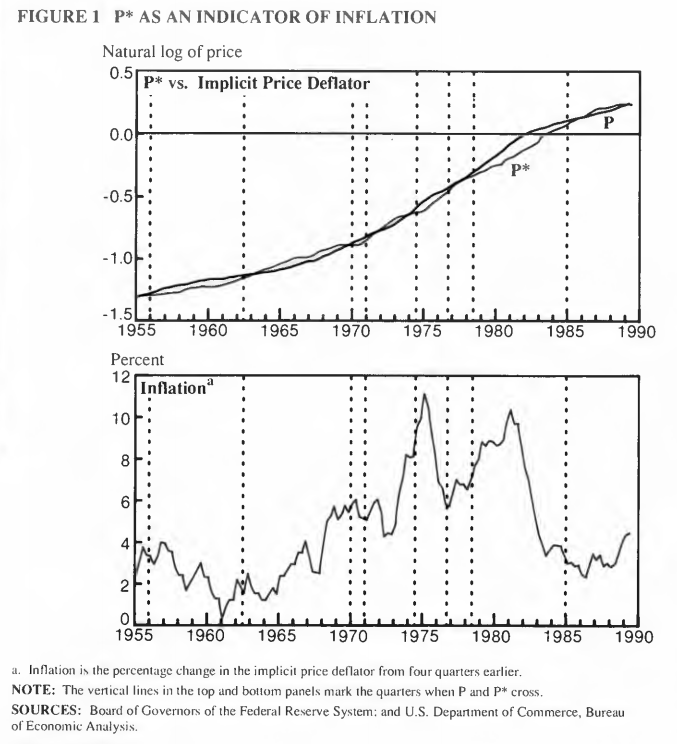 It seems that the P* model does a little bit better than the information transfer model during that period (the IT model is a model of the CPI instead of the deflator): 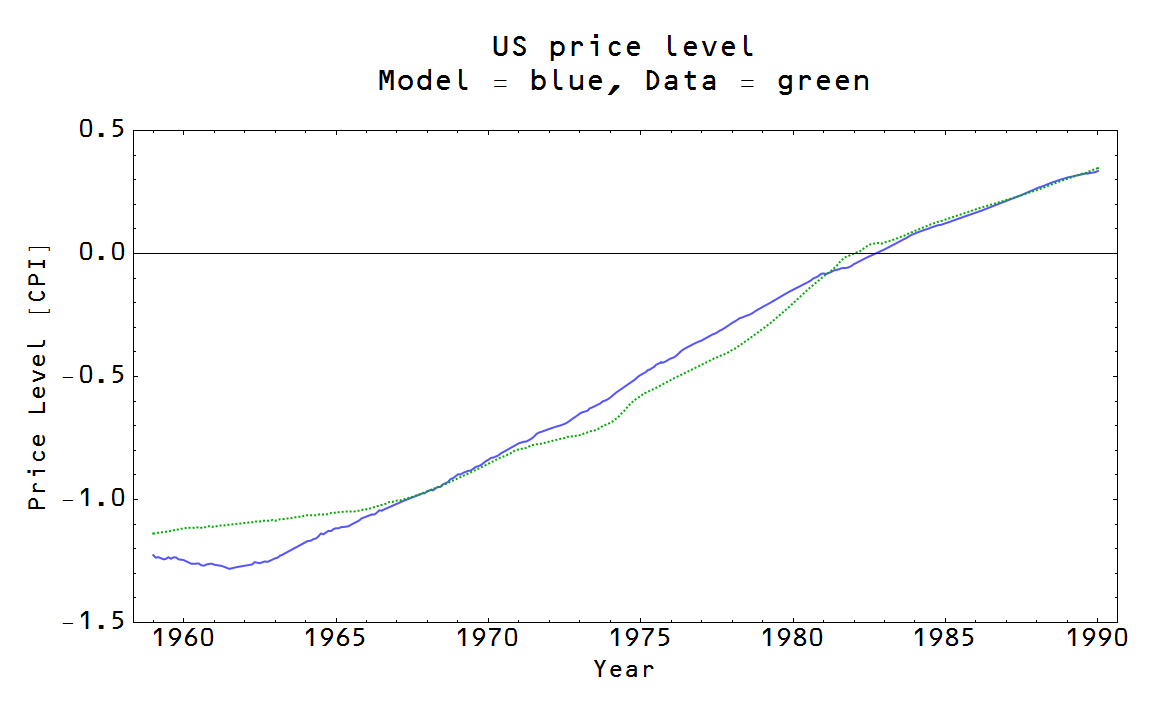 Of course, the benefits of the IT model include having only 3 parameters compared to P*'s 7 or 8 parameters (I've seen anything from 6 to 9 in various references), along with the capability to do this: 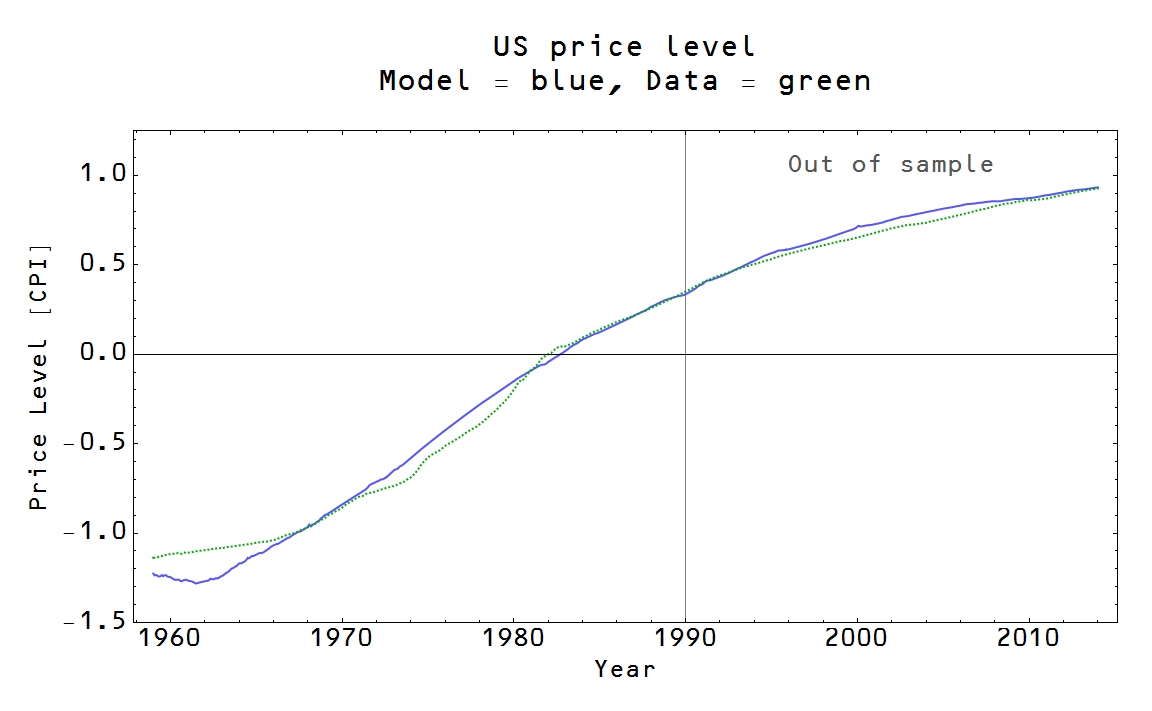 In this graph just above, I've used the parameters fit to 1960-1990 and show the results for 1990-2014. P* as noted by Bernanke above started to predict deflation in 1991-1992. Here is the inflation rate from the IT model corresponding to the "out of sample" prediction above (note there's no deflation): 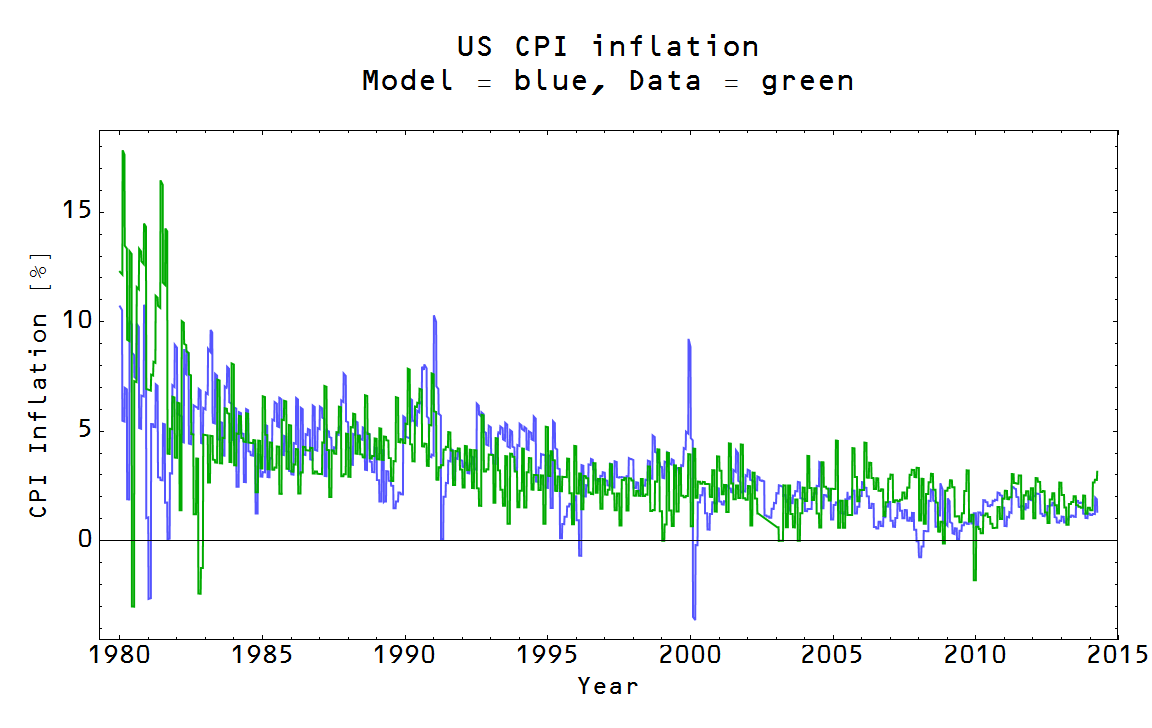