Editor's note: Still cleaning out my backlog of unfinished posts. This is a question I've had and is addressed to the economists out there ... even after reading through a couple macro textbooks, I still don't have a good answer. File under questioning whether real and nominal are actually useful concepts in economics. 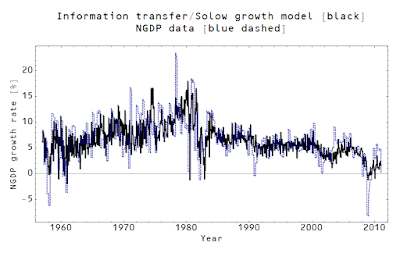 The nominal version of the equation seems to make more sense (it is a combinatorial problem with dimensionless nominal dollar units and 'nominal' labor units).

The real version leads to the mystery of the fall-off in Total Factor Productivity (the 'great stagnation'), and TFP -- i.e. phlogiston -- being the majority of economic growth.


Editor's note, added 5/13/2015: Sounds like a no-brainer, but it requires re-thinking all the other instances of real vs nominal ... as I've addressed here. This post was an initial draft for the one at that link that I abandoned and restarted.

Real and nominal may actually be an attempt by economists to adjust for entropy terms.