An ensemble of labor markets

Believe it or not, this post is actually a response of sorts to David Glasner's nice post "What's Wrong with Econ 101" and related to John Handley's request on Twitter for a computation of the implied unemployment rate given an output gap (which I will answer more directly as soon as I find the code that generated the original graph in question). It is also a "new" model, but still fairly stylized. I will start with the partition function approach described in the paper as well as here. However instead of being written in terms of money, I will write it in terms of labor.


I assumed the productivity states had a normal distribution which results in the following plot of 30 Monte Carlo throws for 100 markets for $\langle \ell^{p}\rangle$: 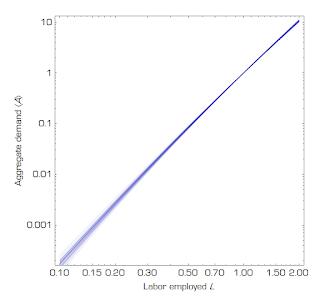 The ensemble of 'productivity states' $p_{i}$ looks something like this: 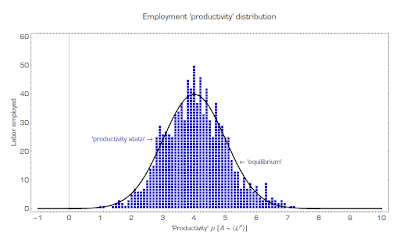 We can fit this ensemble average to the graph of nominal output (NGDP) versus total employees (PAYEMS on FRED, measured in Megajobs [Mj]): 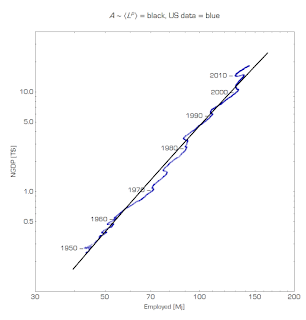 The price level should then be given by the ensemble average $\langle p \ell^{p-1}\rangle$ (switching to linear scale instead of log scale): 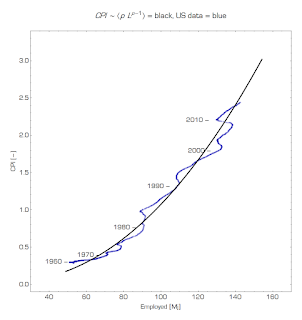 The black lines in these graphs represent a single macroeconomic general equilibrium; as you can see, the true economy (blue) fluctuates around that equilibrium. Now the ensemble of individual markets can be represented as a single macro market, but with a (slowly) changing value of the single 'macro' information transfer index $p = \langle p_{i} \rangle$ plotted below: 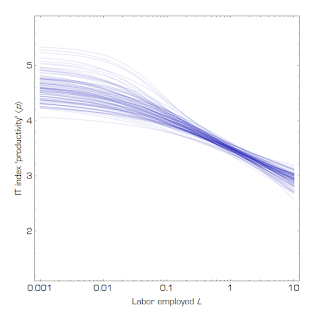 Note that as the size of the labor market grows, productivity falls. This is analogous to the interpretation of the result for nominal output in terms of money supply: a large economy has more ways of being organized as many low growth states than as a few high growth ones. In thermodynamics, we'd interpret a larger economy (larger money supply or larger labor supply) as a colder economy.

The single macro market with changing $p$ is $CPI : A \rightleftarrows L$, which is basically the information equilibrium relationship that leads to Okun's law (shown in the paper as well as here in terms of hours worked, but labor supply also leads to a decent model, graph from here): 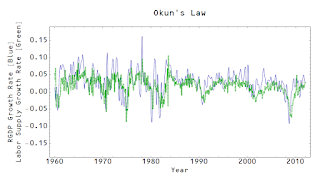 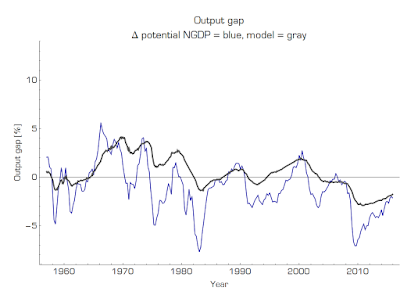 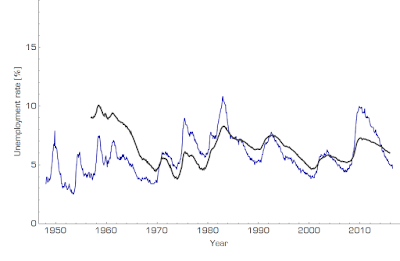 Differences between the model and data could be interpreted as non-ideal information transfer which includes correlations among the labor markets (e.g. coordinating plans that fail together) or deviation from the equilibrium distribution of productivity states. Note that in the output gap calculation, you can see what looks like a plucking model of non-ideal information transfer with a changing equilibrium.

This simple model brings together output and employment, falling inflation and productivity, as well as macroeconomic general equilibrium and microeconomic partial equilibrium in a single coherent framework. It's not perfect empirically, but there isn't much competition out there!

Here's how the distribution of 'productivity' states changes as $\ell$ increases: 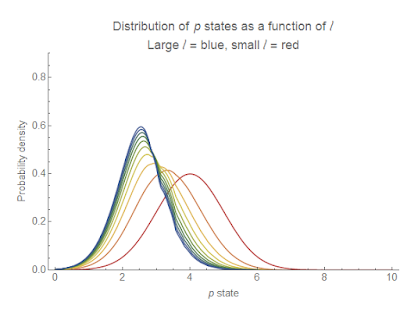