Paul Romer on the Volcker disinflation

I mentioned I was going take a look at Paul Romer's new article on macroeconomics without regard to the string theory analogy; this is one of those posts. The focus here will be on Romer's discussion of the Volcker disinflation. Here is Romer's story:

If you want a clean test of the claim that monetary policy does not matter, the Volcker deflation is the episode to consider. Recall that the Federal Reserve has direct control over the monetary base, which is equal to currency plus bank reserves. The Fed can change the base by buying or selling securities. ... When one bank borrows reserves from another, it pays the nominal federal funds rate. If the Fed makes reserves scarce, this rate goes up. The best indicator of monetary policy is the real federal funds rate – the nominal rate minus the inflation rate. This real rate was higher during Volcker’s term as Chairman of the Fed than at any other time in the post-war era. ... [an] increase in the real fed funds rate, from roughly zero to about 5%, that followed soon [after Volcker took office].


... The rate of inflation fell, either because the combination of higher unemployment and a bigger output gap caused it to fall or because the Fed’s actions changed expectations.

... If the Fed can cause a 500 basis point change in interest rates, it is absurd to wonder if monetary policy is important.

This represents a model of what happened between the inflation of the 1970s and the so-called Great Moderation. First, let me say that the very good information equilibrium (IE) model of interest rates (see my paper) says that making reserves more scarce would generally raise the short term interest rates toward the long term interest rate. However since the monetary base is not related to inflation (see my paper as well as here -- the true clean test of macroeconomics), this would have no impact on the price level (except through non-ideal information transfer, such as expectations based on the wrong mental model of the macroeconomy).

However, we'll ignore that for now, and rather show that one's view of the Volcker disinflation depends on how you see the data. Here's how Romer sees the inflation data: Adding the uncertainty in the fit shows that the pre-1980s segment is much more uncertain than the post-1980s segment. Let's zoom out and show the monetary information transfer (IT)/information equilibrium model of the post-war seasonally adjusted core CPI inflation: 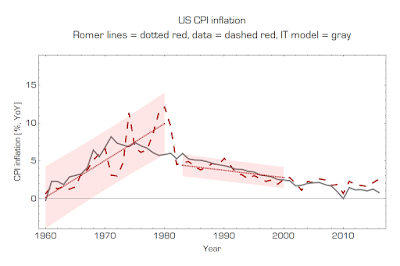 The IT model (gray) sees the two spikes in the 70s as something outside the monetary model -- in fact, they correspond with the oil shocks in 1973 and 1979. Volcker becomes the Fed chair in August of 1979, so you could imagine confusing monetary policy and real shocks to the economy. Romer's use of year over year inflation and low resolution makes his picture of pre-Volcker inflation look more plausible. If we switch to instantaneous inflation (continuously compounded annual rate of change), we can see the oil shock picture (dashed black spikes) look much sharper: 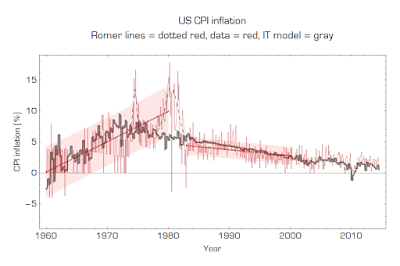 This paints a picture of the disinflation coming nearly a decade earlier than Volcker as well as having a different cause: the relative size of the income/inflation effect to the liquidity effect of monetary expansion: 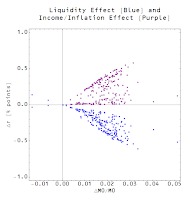 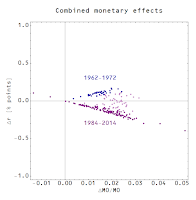 Now what about Romer's claim of a rise in (CPI deflated) real interest rates? We'll draw a representation of Romer's model -- a 500 basis point rise in the real rate after Volcker takes over: 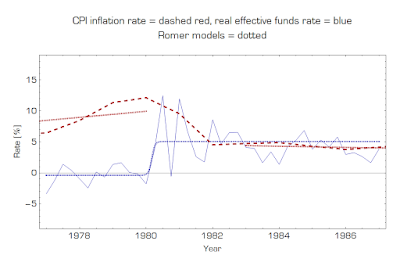 Let's zoom out, increase resolution, and add some error bands on this picture: 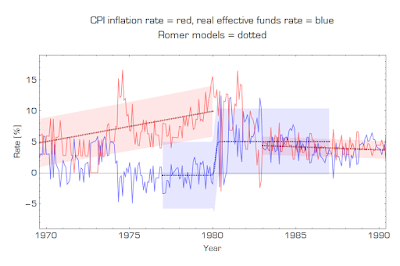 This seems like a plausible interpretation, but if we look at the IT model (shown in gray and black) the picture is very different: 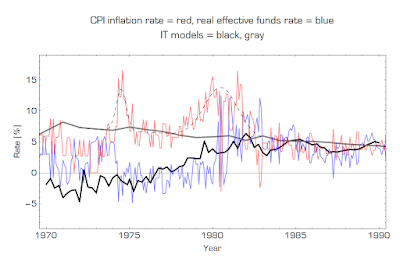 There's no sharp transition. In fact, zooming out even more, the relationship between inflation and the real interest rate is actually fairly complicated: 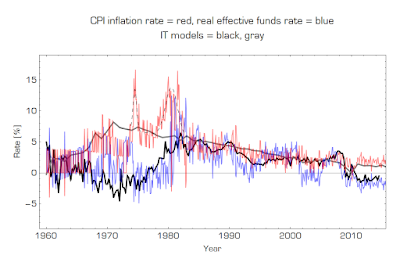 Paul Volcker's term does coincide with the real interest rate becoming approximately equal to the inflation rate (r ≈ π), but this has no particular meaning in the IT model (as far as I know).

Now the monetary IT model isn't the only possible model and in fact a completely different model (based on the Solow model) also works very well and tells a completely different story from Romer's picture or the monetary IT model. I called it the "quantity theory of labor and capital" (QTLK) after the IT quantity theory of labor (a reductio ad absurdum model) plus the Solow model. Here's how this model compared to Romer's lines: 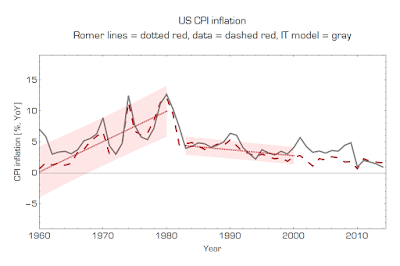 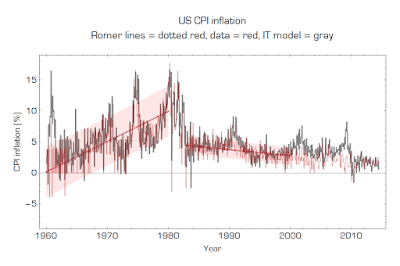 In the QTLK, the primary reason behind the spikes in core CPI inflation is the growth in the civilian labor force (CLF) relative to the population (the change in the civilian participation rate), possibly due to more women and minorities entering the labor force in the 1970s (and baby boomers, see Steve Randy Waldman H/T Steve Roth). Of course, causality could be interpreted the other way where inflation draws people into the labor force to pay their bills. However, the best fit lag shows increases in the CLF precede inflation increases by about 4 months. Of course, one could then say "expected inflation" and hold on to one's prior that inflation is always and everywhere a monetary phenomenon ... 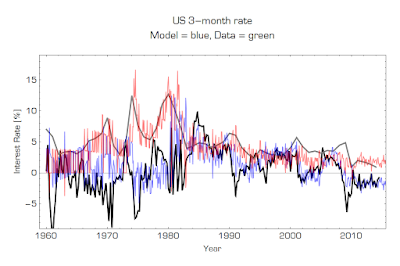 But the real issue here is that Romer seems to think that one particular approach to macroeconomics is unscientific because he thinks he sees a clean test. However Romer is suffering from the same problem he claims Lucas and Prescott are -- too strong of priors in the presence of uninformative data.

In a recent post, Romer gives us some more evidence that he is acting from a strong prior rather than a specific model and comparison with the data. He says (in the course of an open letter to a prospective macro student):


To learn about a department, visit and ask macroeconomists you meet “honestly, what do you think was the cause of the recessions of 1980 and 1982.” If they say anything other than “Paul Volcker caused them to bring inflation down,” treat this as at least a yellow caution flag.


This is a rephrasing of Romer's original model above where Paul Volcker (and the Fed) raised the real interest rate, which caused a recession, which brought inflation down. Romer does not see a difference between:


However, in the information transfer model, this new model from Romer may actually be true, while the original model is not. The story is that the Fed coordinated the economy, causing a fall in economic entropy (proportional to nominal output) when agents took correlated actions.

There is also the possibility that this "avalanche" (recession) might not be able to happen if there is insufficient "snow" (nominal output) build up (see here) -- or the aircraft cannot be stalled if it isn't going slow enough. Essentially, the Fed can't coordinate a sell-off there aren't enough assets out there that can be coordinated by the Fed into panicked selling.

In any case, the two statements above are only the same if you accept the prior that monetary policy caused the recession and inflation at the time was due to monetary policy (and not demographic or "real" factors like oil).

In a sense, the priors determine the entire model! I think this is part of a more general problem in economics -- that there are no real frameworks, only collections of priors. And one of the biggest priors is defining what a recession is. Your framework is supposed to help you figure out what recessions are, not define what recessions are. Asking a macroeconomist what caused the recessions of 1980 and 1982 should evoke the response: We do not know what a recession is, and therefore the causes are inherently ambiguous. Romer, in his advice above, is essentially asking the prospective student to believe in a different article of faith (which at least is more common from what I've gleaned from surveys) in the place of the RBC article of faith.
Posted by Jason Smith at 9:36 PM