Roger Farmer makes an appeal for post-Keynesians to get on board with general equilibrium. Now as I've mentioned before, I have no idea what post-Keynesianism really is. It seems to be a collection of various ideas ranging from government intervention in markets to credit cycles. However, I think I like how Roger Farmer has organized it. After his imagined conversation (socratic dialogue), he says:

My imagined conversation between [a "Freshwater" economist] and [a Post-Keynesian grad student] is meant to illustrate the idea that we can accept the tenets of a version of general equilibrium theory while rejecting the first welfare theorem.

Is a Post-Keynesian essentially someone who rejects the first welfare theorem? Sounds like a good description to me. Anyway, Farmer's point is that you don't need Minsky moments or nonlinear instabilities to get things that look just like Minsky moments or nonlinear instabilities. Farmer shows a way to obtain them in what are essentially DSGE models complete with rational expectations.

Farmer's argument centers on the fact that people who are not alive yet cannot participate in markets so that he can produce a violation of the first welfare theorem's assumptions (complete markets) in order to reject it. Therefore, Farmer continues, government (which is "alive" for all time) needs to operate in order to mitigate the impacts. One of the impacts is an instability in asset prices (sunspots); this instability is modeled using overlapping generations models.

I have no particular problem with any of this. The cause of asset price fluctuations and recessions is something you can bound with the information equilibrium framework, but their mechanisms would likely need something like Farmer's model, something more sociological, or other behavioral models.

I do have a problem with how Farmer connects it with employment in his book. He discusses it in this blog post, but the main take-away is that in his model:


There is a possibility to reconcile these views to some degree. The frequency and size of shocks to employment could be derived from an overlapping generations model (the current set of shocks is consistent with a Poisson process with time scale ~ 8 years, but maybe that 8 year time scale can be achieved with an OLG model). If those shocks are frequent enough and strong enough, compared to du/dt, then what you'd get is a degenerative state. Employment is then like Sisyphus ‒ every time du/dt brings the unemployment rate down, another asset price shock/employment shock happens. It could even be worse and the shock happens before Sisyphus has time to get back to the top. The employment level might look like this: 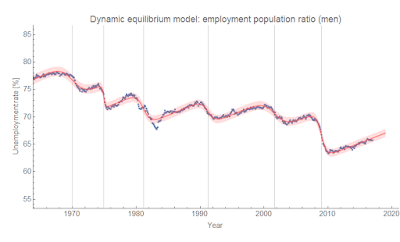 That is the employment population ratio for men; it appears to be hit with shock after shock before it has time to recover to its previous level [1]. It sinks lower and lower. Will this process continue? It seems unlikely to continue until the male labor force is completely unemployed, but the process by which it would stop is unclear.

It's an interesting line of research, and I don't have all the answers. The latter piece after the "However!" is highly speculative. But blogs are for thinking out loud.


[1] It appears that since the 1990s, women's employment may be subject to the same process.

[2] This also would provide an explanation of the so-called "Great Moderation" if the shock frequency is related to the employment population ratio. It peaked in 2000, and women's employment seems to reach dynamic equilibrium [1] in the 1990s.
Posted by Jason Smith at 2:30 PM