I've looked at the ISLM model as an information equilibrium model on multiple occasions, but I thought I'd develop a better reference post for it based largely on this post and the paper (which is now on SSRN) with some updated notation conventions.

The ISLM model is based on two markets: the money market (LM piece, $M$) and the goods market (IS piece, $S$, for aggregate supply). There are additional information equilibrium relationships that relate the price of money $p$ to the interest rate $r$ and investment $I$ (GPDI) to nominal output $N$ (NGDP). In the compact information equilibrium notation we have:

The first and third relationships give us


If we let $M$ be the monetary base (MB) and $r$ be the 3 month interest rate, we can determine the parameters $c$ and $k$ from the data: 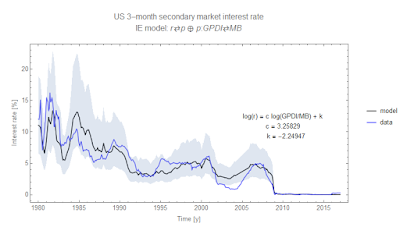 If we let $M$ be the monetary base minus reserves (M0) and $r$ be the 10 year interest rate, we can determine the parameters $c$ and $k$ from the data: 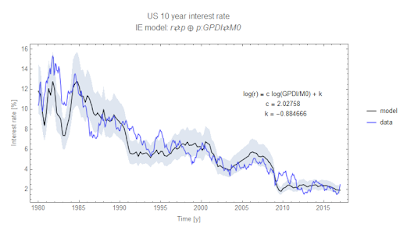 It is also possible to solve these using the same parameters $c$ and $k$ for both interest rates:

This gives us the general trend in interest rates, but for the partial equilibrium model (the "traditional" ISLM model) we need to look at the case where $I$ moves slowly compared to changes in $S$ and quickly in response to changes in $M$ to obtain supply and demand curves in the two markets [1].

Diagrams: the IS curve


Well take the more traditional route to the ISLM diagram (which I did here) than the approach here where a more direct route is taken. This affects the derivation of the LM curve more than the IS curve which we will look at first. If we assume $I$ moves slowly with respect to changes in $S$, we can say that investment stays close to some value $I \approx I_{0}$ while $S$ changes, and therefore

We can solve this by integration


where we define $\Delta I = \langle I \rangle - I_{ref}$. You can think of the angle brackets as representing the observed values (more discussion is here). Substituting the price $r^{1/k_{r}} \approx k_{s} I_{0}/\langle S \rangle$ and a little bit of algebra we obtain a demand curve in the goods market:

Plotting this out (where the variable $\langle S \rangle$ parameterizes our location along the demand curve) looks like this: 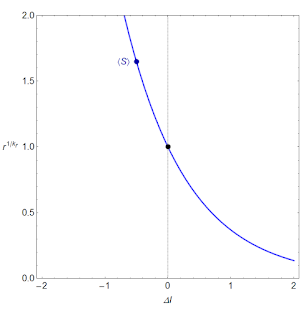 Analogous to the goods (aggregate supply) market [3], we derive the demand curve in the money market and obtain:

The effect is illustrated for $\Delta M = 0$ in the diagram below (which traces out the LM curve, first diagram), and if we then shift $\Delta M$, we can look at the new LM curve traced out by shifts of $\delta I_{0}$ (second diagram): 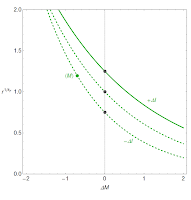 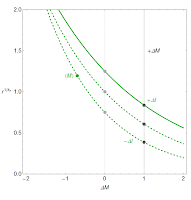 In this picture we are effectively looking at the supply curve, but restricted to cases where the demand curve adjusts to it so we end up with effectively restoring the equation


We could actually just start from $I \sim M^{k_{m}}$, but doing this in terms of supply and demand diagrams requires a bit more of a circuitous route.

Taking $\delta I_{0} = \Delta I$ allows us to place the IS and LM curves on the same graph. The three gray points for $\Delta M = 0$ in the previous graphs are shown on the following graph, so we can see the effect of expansionary monetary policy ($\Delta M > 0$): 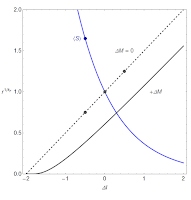 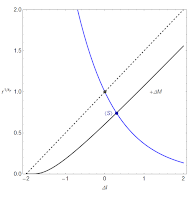 
I do want to illustrate a bit about effective theory and scope using the previous graph. If we show the lines for many possible changes $\Delta M$ as well as $\Delta I$ we get a "grid" of sorts covering the graph (first/left picture below). Well, mostly a grid; you can see that it makes a grid near the center (highlighted in blue), but you get different behavior for large (negative) changes in $\Delta I$ as well as for low interest rates (highlighted in orange). In fact, for some cases there aren't even solutions. 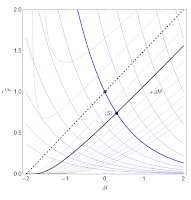 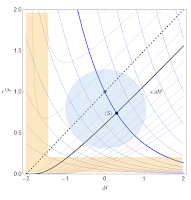 What this means is that the theory is breaking down for those cases: low interest rates or large negative shocks to investment (though, roughly on the order of complete collapse). Much like how Einstein's general relativity breaks down at the singularity (which involves a similar kind of lack of a "grid" for space and time) telling us we need a new theory (quantum gravity), the ISLM model breaks down for low interest rates (likely yielding something like the liquidity trap).


The last piece of our model is the relationship between investment and output. We have $N \rightleftarrows I$ (call the IT index $\eta$) so that

Solving the differential equation gives us 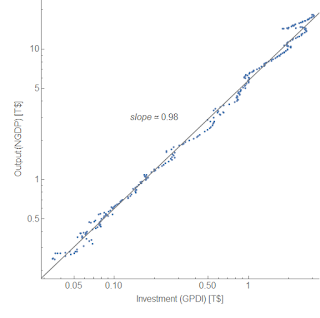 So therefore (assuming this relationship holds, as it appears to do in the long run) we can say that boosting investment boosts output (and therefore unemployment via Okun's law which is just the relationship $P : N \rightleftarrows L$ where $P$ is the price level and $L$ is the labor supply [4]).

[2] This is another key assumption: that the interest rate ($r$) represents the price of money ($M$). It is theoretically possible these can become disconnected.

[3] There's an even easier way to do this but it has more limited scope. If we start from the equation: 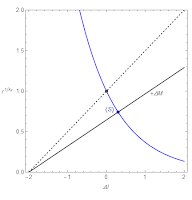 Essentially the scope is limited to a very narrow region around equilibrium.