Comparing the unemployment forecast to the March data

The latest unemployment rate data was released on Friday, so I've added it to the forecast. It's just one point, so it really doesn't tell us much we didn't already know. However the latest data (black point) does not lend any support to the "no change" counterfactual (red): 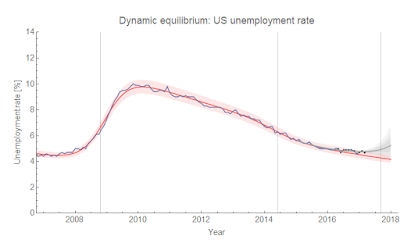 The gray curve represents a potential leading edge of a negative shock in the model (these are generally associated with recessions, but could just be the end of the "Obamacare boom"). This shock counterfactual is based on the gray data points.
Posted by Jason Smith at 10:35 AM