The mystery of Japan's inflation

Noah Smith has said that Japan is where macroeconomic theories go to die (well, except this one), and when I initially looked at Japan's price level it with the dynamic equilibrium model (more here) it looked grim. However, as the Dude says, my thinking about this case had become very uptight. While Japan would not be a good example of the dynamic equilibrium framework on its own, given the framework works for other inflation data (e.g. here or here) we can be a bit more assured that the giant ongoing shock required to fit the price level data isn't spurious. It still could be spurious, but at least it's not a "surely you're joking" ad hoc hypothesis. 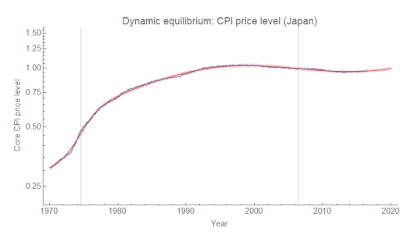 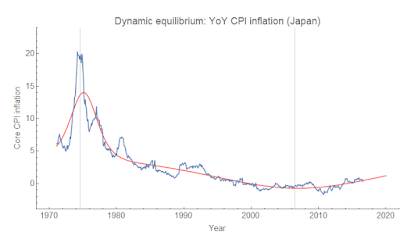 Note that I removed the effects of the VAT increases from the data. The shocks are centered at 1974.6 (positive) and 2006.5 (negative). What's also interesting is that the width (similar to the standard deviation of a normal distribution) of the latter shock is 108 months (9 years) which means it won't be over for many years to come. Instead of "Abenomics", the recent rising/stabilizing inflation is the ending of the giant "lost decade" shock.

Of course, this picture also makes a bold claim that the equilibrium rate of inflation is 4.3% per year (± 0.4 percentage points at 2σ). That seems like something that would be good to test, so here are the relevant forecasts through 2020 (and will be added to the forecast page):

PS For another macro mystery set in Japan, here's my old post on Japan's monetary base.
Posted by Jason Smith at 11:20 AM