Previous birthday celebrations focused on the most popular posts or prediction successes. I thought that for this birthday, we could celebrate some of my favorite posts. In no particular order:

This post provides the best description of the motivation that goes into treating ensembles of markets (which relates to other work on statistical equilibrium) and changing information transfer indices. It is the theoretical basis for two posts below: [3] and [5].

This represents a concise summary of the direction that I've found most interesting recently. Coupled with the basic supply and demand/production function unification [4], the ensemble approach in [1], and the matching theory in [6] it forms the core tools needed to understand a sizable chunk of economics.

An application of [1] to the stock market that explains factor models and their issues.

A really simple way to understand the scope of supply and demand as well as its connection to growth (i.e. production functions).

[5] An ensemble of labor markets

A pair of posts that uses principal component analysis and dynamic equilibrium to get a picture of employment by industry/sector.

[8a] Consumption, income, and the PIH
[8b] Curve fitting and relevant complexity

A pair of posts that offer a simple 1st-order explanation of income and consumption data. In the second one I talk about methodology. While I enjoy writing the posts on methodology, I'm not really as proud of or interested in it. I think a good analogy is with movies. I like being a director (making movies), but sometimes I review other movies. The posts on methodology all tend to be "bad reviews" which are fun to write (and read). They're just not fulfilling as doing interesting original work.

In this pair of posts I derive the asset pricing equation and the Euler equation from a maximum entropy argument. They both show that the utility description is a bit superfluous, and since they require maximum entropy distributions imply that correlations in agent choices will cause them both to fail. This work is utilized in [11] below.

I show that you can capture the "Kaldor facts" about growth as information equilibrium relationships. I also show that the data is better captured by different relationships.

Here, the IT model performs much better than far more complex models and policy heuristics using the same tests that economists used.

There is a very interesting connection between information equilibrium and causal entropy (which was referred to as "a new equation for intelligence" in the author of the paper's TED talk).

This post itself is terrible and consists mainly of notes. However, it might provide an explicit example of the algorithm that the market represents and has a direct connection to information equilibrium. Instead of a rational agent argument where money represents utility, we would transition to an argument where prices represent flows of information.

[15] Is the market intelligent?

My "take down" of prediction markets and the idea that markets perform an information aggregating function rather than just solving an allocation problem. This was actually a summary of the original work on prediction markets (see e.g. here) that never went anywhere for me in my regular job (no one wanted to fund it), but did lead to this blog. Basically, this post was part of my notes when I put up these three posts ‒ the original application was going to be metrics for prediction markets.


Update 24 April 2017: As I mentioned here, writing this post inspired this graphic that captures the interconnections described above: 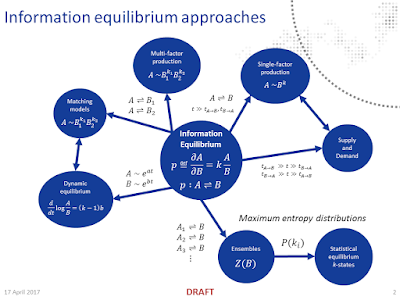