We're coming up to the end of a forecast I made almost three years ago. The previous update is here and everything is at the aggregated forecast post. It's a forecast I made in comparison with a NY Fed DSGE model, and it appears to be coming down to a tie. However that's a win for the five parameter monetary information equilibrium model (that also works for the entire post-war period) versus the 40+ parameter DSGE model.

Here is the updated forecast graph for the recently released PCE inflation data: 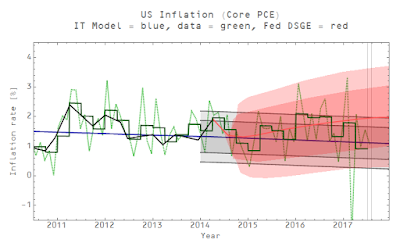 The performance is approximately the same (the IE model (blue) is slightly better, but biased low): 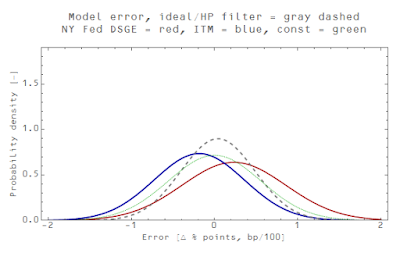 What is interesting is that the constant inflation model (green) does better than both. It's interesting because it's the same result as a dynamic equilibrium model of PCE inflation:


As a side note, over the course of working with the information equilibrium model I've come to a better understanding of how it all fits together. This is a good sign as it implies I'm learning something! The monetary IE model used above (and documented in detail in my paper) is probably best understood as an ensemble model with money as a factor of production with a particular model for the changing IT index:


As such, it's scope is defined in terms of how well the model for the IT index matches the empirical data.