Something has changed in long term unemployment

I read a paper by Gabriel Mathy today (an earlier version appears here) about long term unemployment. We'll use the BLS definition of being unemployed 27 weeks or more, available from FRED here. Mathy notes that in the aftermath of the Great Depression, long term unemployment decreased (relative to unemployment) — and that this hasn't happened in the aftermath of the Great Recession. It's referred to as "hysteresis" in economics, borrowing a term in physics (coined by Ewing in the late 1800s) used to describe e.g. a history dependence in magnetization.

I looked into it using the dynamic information equilibrium model (my paper describing the approach is here), and sure enough it seems something has changed in long term unemployment. Here's the basic model description of the data since the mid-1990s 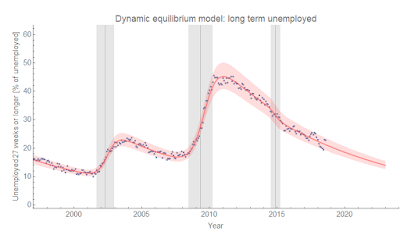 We find the structure is similar to the unemployment rate. If we look at an "economic seismograph" (which represents the shocks) with various other labor market measures including job openings from JOLTS and Barnichon, we can see the overall structure is similar:

So let's look back a bit further in time: 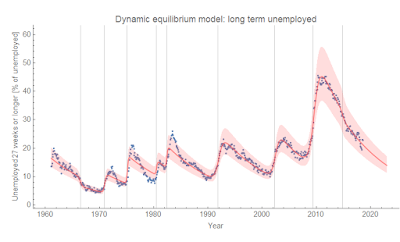 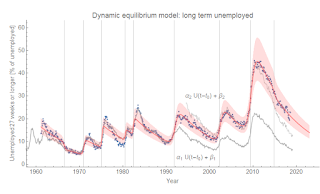 Somthing happened between the 70s and the 90s to cause long term unemployment to become cumulatively worse relative to total unemployment.

The "proper frame" in the dynamic equilibrium approach is a log-linear transformation such that the constant rate of relative decline (i.e. the "dynamic equilibrium") is subtracted leaving a series of steps (which represent the "shocks"). We look at

I also lagged unemployment by 27 weeks to match up the shock locations. If we do the transformation for both measures, we can see how long term unemployment declined relative to unemployment before the 1990s (labelled a, b, and c) in the graph. 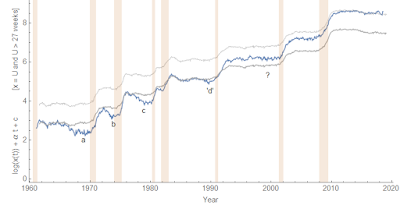 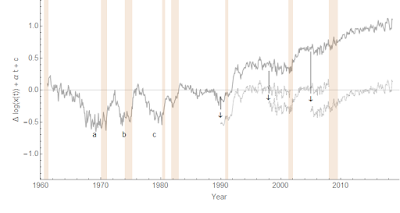 What is happening here? It seems in the past there used to be a point when labor became scarce enough that employers started hiring the long term unemployed at a faster rate. At some point, e.g. experience outweighs the negative effect of being unemployed for over 6 months. That's just a story, but it's one way to think about it. One possibility to explain the change is that it takes longer for that faster decline in long term unemployment to kick in such that another recession hits before it can happen. Another possibility is that there's just no pick-up in hiring the long term unemployed — employers see no real difference between an experienced worker who has been unemployed for 27 weeks and a worker without experience.

But the data is clear — the past few recessions just add to the fraction of long term unemployed relative to total unemployment and there hasn't been any subsequent recovery.
Posted by Jason Smith at 1:00 PM