The inflation data has continued to be consistent with the forecast confidence limits since 2017, and the latest data out over a week ago is no different. It's true these confidence limits are pretty wide. Year over year inflation should've been between −0.1 and +4.0% last month according to the model (the value was 2.9%). Next month, the model says it should be between 0.0% and 4.1%. But this spread is comparable to the NY Fed's DSGE model for PCE inflation nearly two years out (which is a more stable measure than CPI). And the dynamic equilibrium model only has four parameters [1]!

The solid red line is the original forecast and the dashed line shows an update of the shock parameters I made in March of this year (after the "lowflation" shock ended). As the change was negligible (i.e. well inside the confidence bands), it's shown for informational purposes. Below, I show continuously compounded (i.e. log derivative) and year over year changes in CPI (all items) along with the CPI level. (Click to enlarge.) 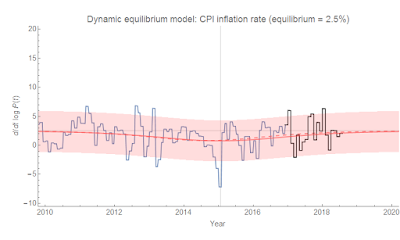 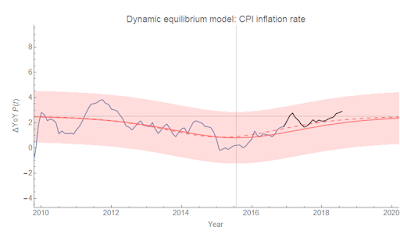 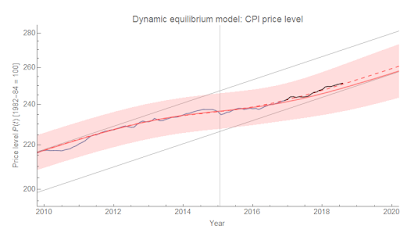 
I didn't think there was any real need to write an entirely new post for the data that came out in September, so here's the graph with the latest post-forecast data: 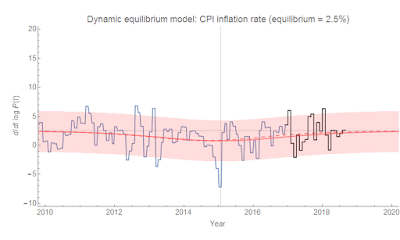 
[1] Over the period from 2010 to 2020. If we include the data back to the 1960s, there is another shock adding three more parameters — but the contribution of those additional parameters has been exponentially suppressed since the 1990s.
Posted by Jason Smith at 6:00 PM