I haven't been showing the performance of the UK 10-year interest rate model comparable to this one for the US (that I originally showed here). It turns out that the UK model is doing quite well (as opposed to the US version which appears to be subjected to a bit of a shock sometime between 2015 when the forecast was made and today ...). Click to enlarge:

In fact, just after the Brexit vote the UK rates deviated from the expected model error by about as much as the recent US data has, but by 2017 the "Brexit shock" had faded. Was the Brexit shock to interest rates transitory, while the election shock more durable? The "shock" view does give a reason for the US data to deviate from the model forecast (however, so does the "recession indicator" view).

I would also like to note that the dynamic equilibrium model of the Moody's AAA data doesn't show any major shock: 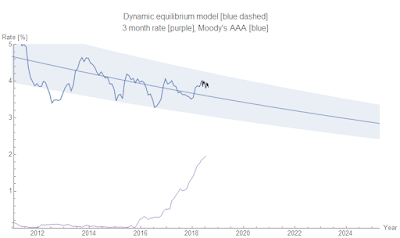 However, that model also sees the US model at the top of this post as under-estimating the expected interest rate in recent years (for more information see here).
Posted by Jason Smith at 6:00 PM