Productivity came up on Twitter yesterday, and I put together a quick dynamic information equilibrium model (DIEM) of the utilization-adjusted Total Factor Productivity (TFP) data curated by John Fernald at the FRBSF. First, let me note that I generally think of TFP as phlogiston. However, this case is a good example of potential ambiguity in finding the dynamic equilibrium. 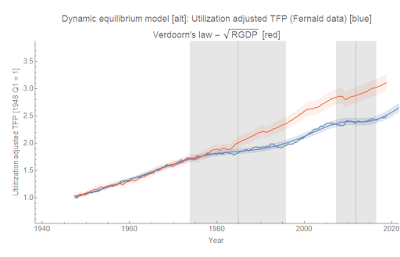 This data actually fits pretty well to Verdoorn's law that says (d/dt) log P ~ 0.5 (d/dt) log RGDP, and the shocks are deviations away from Verdoorn that just change the level. Additionally, this version has most of the data as equilibrium data (an underlying assumption of the DIEM approach). The fit is just slightly worse than this other fit (in terms of AIC, BIC, errors, etc) that sees the 80s and the present as equilibrium with positive shocks in the 50s & 60s as well as during the 2000s (i.e. where the previous fit was "in equilibrium"). This version says Verdoorn's law was just a coincidence during the 1940s & 50s (when it was hypothesized). 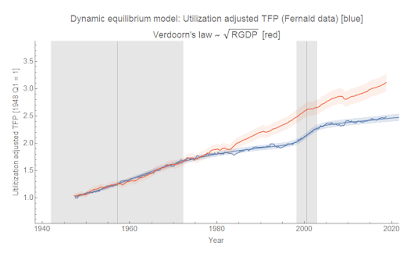 Of course, there are other reasons to prefer the second fit — e.g. it matches better with the UK data, it has recognizable events (post-war growth, the financial bubbles). But the best way to show which one is right will be data. The first fit predicts a return to increased productivity growth soon. If higher growth doesn't return soon, it means each new data point requires re-estimating the fit parameters for events in the past — a sign your model is wrong. The second predicts continued productivity growth at the lower rate with any major deviations implying a new shock (not re-estimating parameters for old shocks).

But still, the math on its own is ambiguous. The difference in AIC isn't enough to definitively select one mode over another. Circumstantial evidence can help, but what's really needed is more time for data to accrue.

Not quite enough data has accrued yet ... but the data revisions are more consistent with the fit with shocks in the 60s and 2000s: 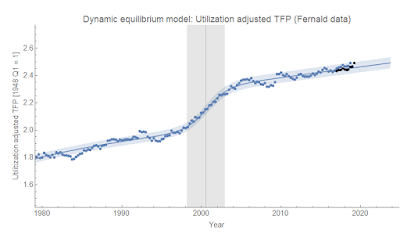 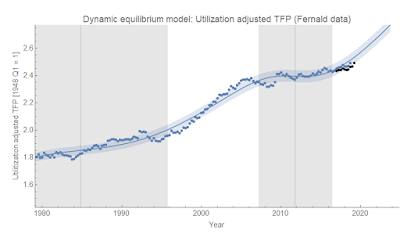 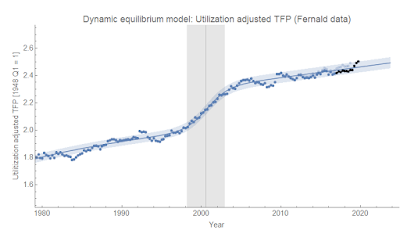 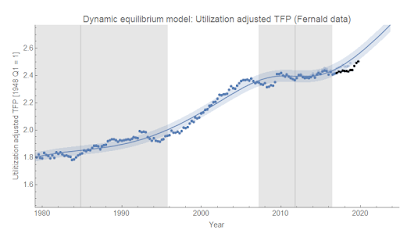 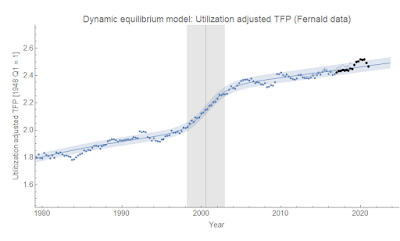 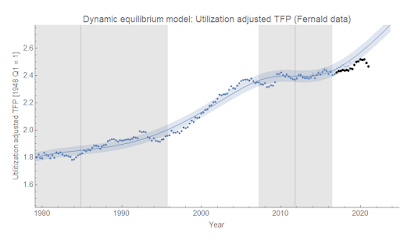