The basic asset pricing equation as a maximum entropy condition

Commenter LAL has brought up the basic asset pricing equation a couple of times, and so I had a go at looking at it as a maximum entropy/information equilibrium model. Turns out it works out. In Cochrane's book (updated with link) the equation appears as:


Where $p_{t}$ is the price at time $t$, $c_{t}$ is consumption at time $t$, $u$ is a utility function, and $\beta$ is a future discount factor. Now $x_{t}$ is also the price at time $t$ (although it's called the payoff) and of course there is the funny business of the $E$ that essentially says all the terms at a time $t+1$ exist only in the minds of humans (and turns an $x$ into a $p$). Rational expectations is the assumption that the $E$ is largely meaningless on average (i.e. approximately equal to the identity function).

As a physicist, I'm not particularly squeamish about the future appearing in an equation (or time dropping out of the model altogether), so I will rewrite equation (0) as:


It turns out much of the machinery is the same as the Diamond-Dybvig model, so I'll just adapt the beginning of that post for this one.

The asset pricing equation is originally a model of consumption in two time periods, but we will take that to be a large number of time periods (for reasons that will be clear later). Time $t$ will be between 0 and 1.


for $i = 1 ... n$ where $MU_{c_{i}}$ is the marginal utility (a detector) for the consumption $c_{i}$ in the $i^{th}$ period (information destination). We can immediately write down the main information transfer model equation:


Where the $C_{i}$ and $a$ are constants. The basic timeline we will consider is here:


Normally, you'd plug these into the utility equation (2), and maximize (i.e. take a derivative with respect to $\xi$ and set equal to zero). The picture appears in this diagram (utility level curves are in gray): 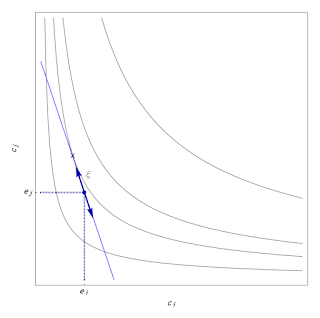 The change in the amount $\xi$ of the asset held represents wiggling around the point $(e_{i}, e_{j})$ along a line with slope defined by the relative size of the prices $p_{i}$ and $p_{j}$ to reach the point labeled with an 'x': the utility maximum constrained to the light blue line.

Instead of doing that, we will use entropy maximization to find the 'equilibrium'. In that case, we can actually be more general, allowing for the case that e.g. you don't (in period $j$) sell all of the asset you acquired in period $i$ -- i.e. any combination below the blue line is allowed. However, if there are a large number of time periods (a high dimensional consumption space), the most probable values of consumption are still near the blue line (more on that here, here). Yes, that was a bit of a detour to get back to the same place, but I think it is important to emphasize the generality here.


Not quite equation (1), yet. However, note that


Which is formally similar to equation (1) if we identify $\beta \equiv \alpha_{i}/\alpha_{j}$. You can stick the $E$ and brackets around it if you'd like.

I thought this was pretty cool.