An anonymous commenter asked if I could do a version of this post for the Euro/British Pound exchange rate and the model comes out with an interesting result/prediction. The exchange rate has been falling over the past five years (1 Euro buys fewer British Pounds today than five years ago).

The information transfer model (ITM) essentially says that the exchange rate for two currencies is roughly proportional to the ratio of NGDPs for the two countries issuing those currencies (X12 ~ NGDP1/NGDP2). However in general there are large fluctuations around the model -- exchange rates are very volatile. I speculate that the reason is that traders have an incorrect theory of what sets exchange rates in this post.

Anyway, here are the model's results: 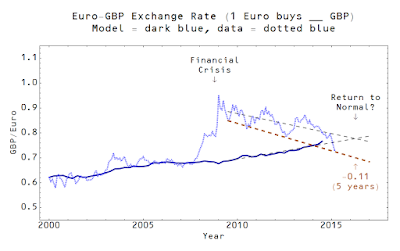 This model works well -- up until the financial crisis, when the Pound loses value against the Euro even though the Great Recession was about the same strength in the two regions. This probably reflected the incorrect view that the UK's rather large level of quantitative easing (QE) would devalue the Pound. However, in the ITM, QE does not impact NGDP so there was no commensurate rise in UK NGDP relative to EU NGDP: the "fundamental" value (given by the ITM) has only slowly drifted upward due to stronger growth in the UK relative to the EU. Ever since that incorrect (according to the model) move by the markets, the exchange rate has been drifting back to the "fundamental" value.

The trends indicate that exchange rates will return to their fundamental value about early to mid-2016. The Greek crisis (e.g. if Greece leaves the Euro) could push exchange rates away from this, and in any case, markets will probably over-shoot this equilibrium (making the Pound stronger than it "should" be).

Much like in interest rate markets, there are large fluctuations in currency markets that deviate from the ITM trend. It is possible these "irrational" periods represent real genuine economic effects or the impact of market expectations. However it seems perfectly consistent with episodes of market herding behavior resulting in non-ideal information transfer and market failure. That is to say there might not be any economic model underlying these effects -- just a sociological one.

Then again, the ITM may be wrong ... I definitely haven't put my money where my mouth is! But then again, the ITM says that markets don't really process information so there's no theoretical reason to believe bets reveal beliefs.
Posted by Jason Smith at 6:17 PM