The importance of transversality conditions (more on the Ramsey model)

There has been some fun and interesting discussion of the Ramsey-Cass-Koopmans [RCK] model on this post of mine. Sorry to those in the discussion that I haven't gotten back to the comments yet -- I've been taking my time to think about what's been brought up. I noted at the end of my post that:

Now there is some jiggery-pokery in the [RCK] model -- economists include "transversality conditions" that effectively eliminate all other possible paths [in the phase diagram].

This was not some throw-away line in the conclusion; it was the key point of the post. I think LAL's comment is a really useful way to understand how Nick Rowe and I ended up talking past each other:

I think you should pay more attention to the transversality conditions...there is a lot more economic content to them than you are realizing...

I completely agree that there is a lot of economic content! I think this is what Nick Rowe thought I kept missing when he metaphorically threw the eraser at me sitting in the back of the class ("What's the difference between pendulums and people? People have plans and expectations about the future, that affect their current actions."). However, my main point was that the transversality conditions (enforcing those plans and expectations about the future) are practically all of the economic content of the RCK model -- the RCK equations are somewhat superfluous.

Let me start with the explicit numerical model, parameters and all: 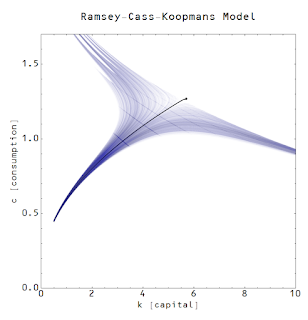 As you can see, most of these paths diverge from the saddle path -- and that's just for being 1% off. So given measurement error and random events, you are unlikely to find yourself exactly on the saddle path.

One of the main purposes of the transversality conditions is to say nearly all of those 2000 paths don't make economic sense. I borrowed this particular description of the argument/intuition from these lecture notes [pdf], but in general this is what Nick was getting at:

Imagine a path along which consumption is falling and k is therefore growing very large. Along such a path the product u'(c) k would grow rapidly, probably causing the limit [to violate the transversality conditions]. Such a path could not be optimal, however, because the economy is accumulating excessive hoards of capital, the output of which never gets consumed because it is reinvested instead. It would pay for the economic planner to slightly and permanently increase consumption, an option that is perfectly feasible given the rapid growth in k. 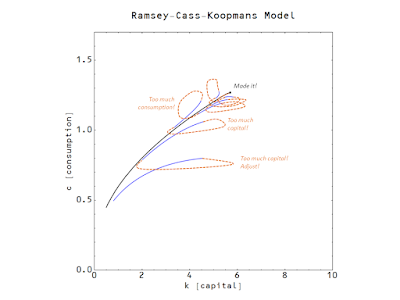 You can think of the blue segments as the times when the economy is obeying the RCK model and the orange loops as the times when the economics enforcing the transversality conditions is driving the economy. And this is where we come to my point: most paths would consist of mostly those loops since nearly all paths in the neighborhood of the saddle path diverge from the equilibrium point.

That is to say the typical path would be incredibly jagged [1]. Most of the time it would not be following the RCK saddle path -- or even obeying the RCK model equations, but instead would be on some correction jog taking the economy back to the saddle solution because of the transversaility conditions [2]. A typical path would look like this: 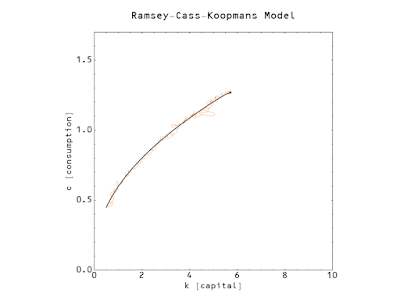 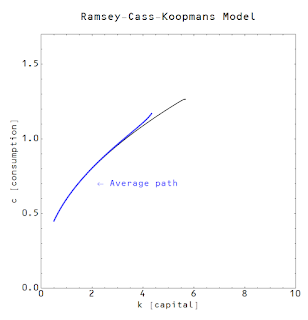 That means the necessary transversality conditions that end up representing most of the economics of the RCK model if understood in the neoclassical sense (i.e. why only 1 of those 2000 paths turns out to be valid) are actually unnecessary. The RCK model equations (at the top of the post) should be understood as establishing all possible ways to consistently divvy up capital and consumption over time. The transversality conditions say that only one of those ways is valid by fiat. An ensemble approach says that all ways are valid, but observations should be consistent with the most likely path.

If I understand Nick Rowe's comment below ("If rational, [Robinson Crusoe] would jump [to the Saddle path] immediately, and stay on it forever.") the picture looks more like this: 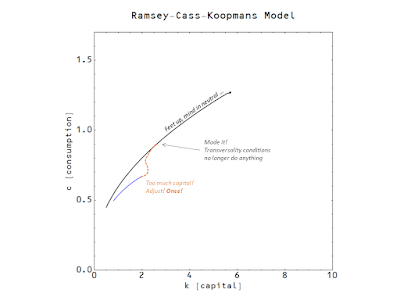 I agree that is the rational (model-consistent) expectations view, but in that view the transversality conditions do next to nothing. They apply once when Robinson Crusoe is first stranded and calculates how much rum he has. After that, Crusoe lives a 'feet up, mind in neutral' beach bum life -- not having to worry about having drunk too much of the rum or too little. He's no longer an optimizing agent, but passively obeying the differential equations at the top of this post.

There are also the questions of a) how do you know what the saddle path is? and b) how do you determine if you're on it? Robinson Crusoe has to spend a finite amount of time figuring out the path and his location relative to it to a given (finite) accuracy ... something that gets infinitely harder as you approach the equilibrium. And valuable drinking time to boot!


[1] This is actually what happens in Feynman path integrals -- the set of smooth paths has measure zero, so a typical path contributing to the path integral is a noisy path "near" the classical solution.


[3] It becomes numerically unstable in the brute force way that I've implemented the model and the actual solution wasn't exact so I was unable to show the whole path on account of an outbreak of laziness in finding the exact solution and making sure the random path initial conditions weren't biased (as they seem to be ... towards the all-consumption solutions).
Posted by Jason Smith at 6:00 PM