The question that's come up in the econoblogosphere is this: shouldn't we be getting out of the liquidity trap at some point? Brad DeLong puts this in terms of the "omega point" -- shouldn't the long run (the omega point) be getting closer? Krugman says we should expect a long slog.

Brad DeLong is right -- persistent low interest rates should be puzzling from a mainstream economic view.

Scott Sumner agrees mostly with Krugman and DeLong, but has a just so story that allows him to hold onto his priors.

On the other hand Krugman’s right that [a persistent low interest rate] isn’t actually unprecedented, we had near-zero rates from 1932 to 1951, and then again in Japan beginning in the late 1990s, and still ongoing. ...

In my view we had a perfect storm of shocks that just barely added up to zero rates for 7 years in the US, but not enough for Australia, and more than enough for Japan (and perhaps going forward, Europe.)

I ask you: which story is better from a scientific/Occam's razor point of view ...

Or we can look at the perfect storm ... starting with an unexplained 30 year trend:

A 30-year downtrend in the Wicksellian equilibrium real interest rate. And the last step down after 2008 was aided by a structural shift in the US and Europe from investment to consumption, as an after effect of the housing bust and tighter lending standards.

One of Sumner's effects is this:

For instance, after unemployment compensation returned to the usual 26 weeks in early 2014, job growth accelerated.

He's right. It did. But what happened? Again, you need a model and the best economic model is a matching model. It's completely mainstream, but here's the information equilibrium version.

What happens is that a job opening and a job seeker are "matched" and form a "hire". Now job seekers have outnumbered openings by more than is typical since the recession. At least until the start of 2014 when job openings jumped up. Have a look at this chart: 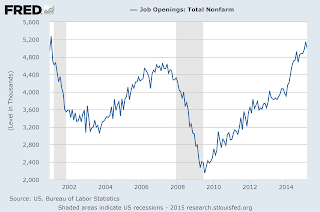 So a drop in unemployment compensation caused businesses to offer more jobs? It may well be true, but that paints a sick view of business owners. They waited around until people were more desperate and then put out some ads for jobs?

If you look into this a little bit more than not at all, you can actually see that about a quarter of that boom is actually in the health care industry (no boom is visible in retail, the jobs most people have):

Note that January 2014 is when the PPACA (aka Obamacare) went into effect. The jobs boom has little to do with unemployment compensation and is pretty much mostly Obamacare -- insurers, doctors' offices and hospitals had to hire staff to deal with the influx of newly insured patients.

Or you can hold onto your prior that unemployment insurance is not a free market therefore it must have some sort of bad effect ... it's just gotta!

Maybe it’s just my imagination, but on occasion I think I see [Paul Krugman] “peeking” at markets, to confirm his (often excellent) intuition about where things are going. And when he fails to do so, as in early 2013, he pays a heavy price in lost prestige.

Not this again! Sumner's analysis was mathematically incorrect and a rather cheesy Keynesian model gets the order of magnitude about right. Actually, that Keynesian story it gets it about right for Japan as well!
Posted by Jason Smith at 12:00 PM