The Euler equation as a maximum entropy condition

In the discussion of the RCK model on these two posts I realized the Euler equation could be written as a maximum entropy condition. It's actually a fairly trivial application of the entropy maximizing version of the asset pricing equation:


To get to the typical macroeconomic Euler equation, define $\alpha_{i}/\alpha_{j} \equiv \beta$ and re-arrange:

The Euler equation essentially says that [an agent] must be indifferent between consuming one more unit today on the one hand and saving that unit and consuming in the future on the other [if utility is maximized].

The intuition for the maximum entropy version is different. It does involve the assumption of a large number of consumption periods (otherwise the intertemporal budget constraint wouldn't be saturated), but that isn't terribly important. The entropy maximum is actually given by (Eq. 4 at the link, re-arranged and using $p_{j}/p_{i} = 1 + R$):


The form of the utility function $U$ allows us to transform it into the equation above, but this is the more fundamental version from the information equilibrium standpoint. This equation says that since you could be anywhere along the blue line between $c_{j}$ maximized and $c_{i}$ maximized on this graph: 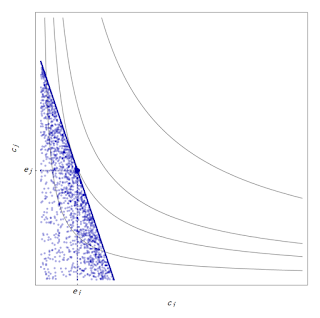 [1] The graph shown is actually for a large finite dimensional system (a large, but finite number of consumption periods); the true entropy maximum would fall just inside the blue line/intertemporal budget constraint.