Sumner is confused about Australia; I am not

Australia's Great Stagnation is a new post from Scott Sumner wherein he is "perplexed" that his frequently cited example of monetary offset at work has started to lag in NGDP growth. He estimates future RGDP growth to fall to roughly 2.5% on average, and lower inflation going forward. He compares it to Canada, which is actually a pretty good comparison in the information transfer model: 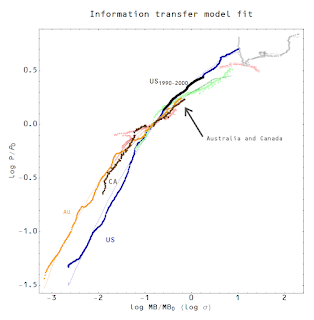 Australia is roughly where Canada is in its evolution as an economy and both are roughly where the US was in the mid 1990s. US RGDP growth at that time was about ... 2.5%: 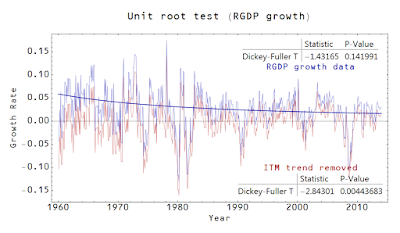 And Canada has started to undershoot its inflation target recently.

The Great Stagnation non-story (i.e. cross-national trends towards lower inflation and lower NGDP growth as an entropic process with no microeconomic explanation) is holding up extraordinarily well!
Posted by Jason Smith at 11:19 AM