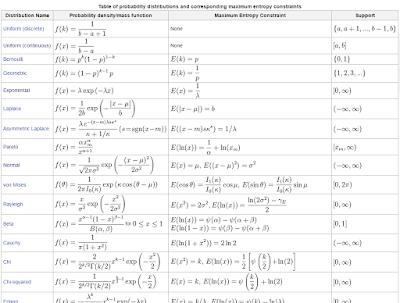 One quibble with this chart is that the uniform distribution is the maximum entropy distribution given a constraint that the random variable has a maximum and minimum value (continuous) or covers a finite number of states (discrete). The former is useful for e.g. budget constraints in economics -- you can spend up to X dollars means a probability density of 1/X -- a minimum of 0 and a maximum of X.
Posted by Jason Smith at 4:23 PM