What is wrong with economics in one chart

Ed. note: I clearing out my drafts of ostensibly blogable material. This is two of two.

Mark Thoma had a link to David Warsh, which made me look up some papers by Michel De Vroey, including this one [pdf]. In that paper I found an excellent distillation of what is wrong with economics. Check out this chart of the evolution of economics starting from a Keynesian initial condition: 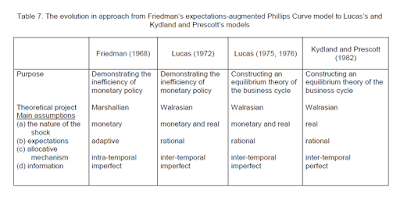 The first major problem of economics is demonstrated with the line "Main assumptions: (a) the nature of the shock". The problem? This line is filled out with something. As I have stated before, economists (mainstream and heterodox alike) all seem to operate as if they know the precise nature of economic shocks. Give it up. We don't know that yet. Debt deflation, monetary policy expectations, real business cycles, animal spirits, sunspots, coordination failures, financial crises, whatever it is that Steve Keen is doing -- these are all hypotheses.

This is not solved by any proposed new economic methodology. Even the "new empiricism" that Noah Smith likes to tout is not being conducted in a way to test these different hypotheses against each other. Sure comparing your New Keynesian model to data is a great idea, but systematically comparing one model against another [1]? That's where knowledge begins. However I'll bet you'll find that both models explain the data just as well.

The second major problem (which also shows no sign of changing) shows up in the transitions between the columns. The issue is that new ideas in economics are incorporated into models with zero empirical support for the changes.

Did we learn that an equilibrium business cycle had better explanatory power than inefficient monetary policy between 1972 and 1975? Nope.

Did we learn that microfoundations made more successful models between 1968 and 1972? Nope.

Did we learn that monetary policy was irrelevant between 1976 and 1982? Nope.

If you disagree, point to the empirical findings that motivate such a change occurring betwen those years.

For modern examples, look to behavioral economics and financial sectors being added to NK DSGE models in the aftermath of the financial crisis. Did we figure out that these were responsible for the failure of the DSGE models between 2007 and 2011? As Paul Krugman frequently points out: Keynesian IS-LM saves a lot of the phenomena.

In each of these cases, the theoretical developments are in response to successes!

Equilibrium business cycles was a response to the relative success that intervention via monetary and fiscal policy had in stabilizing the economy. Likewise for microfoundations and rational expectations. Real business cycles comes right after interventionist monetary policy is credited with breaking the back of inflation.

You can see it in the addition of new effects to NK DSGE models as well -- it happens in the shadow of the success [2] of "paleo-Keynesianism" and "depression economics" in the aftermath of the Great Recession.

[1] I put my money where my mouth is. Here are several predictions with the information equilibrium framework going up against a NK DSGE model, some vague monetarist models, a prediction market, and the forecasts of several central banks.