There is a new working paper on field experiments in economics from Omar Al-Ubaydli and John List. I am in the process of looking into this literature review, but after 1) figuring out the List (2004) that the only figure comes from is neither of the List (2004) papers cited in the references and 2) pulling out the reservation prices from the correct List (2004) and coming up with this histogram [1]: 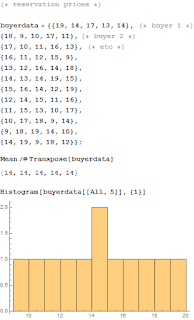 ... I decided to write my first Tweetstorm.

I pulled some quotes from the working paper as well. These two are consistent with the information transfer framework:

"Chamberlin found that prices were volatile, and that they converged to a below-equilibrium price, implying less-than-fully-efficient exchange."

"In particular, many behavioral anomalies that were regularly detected in laboratory experiments, such as the endowment effect (Knetsch, 1989)"

And this is what I was commenting on in this post:

"the key advantage offered by the laboratory experimental methods pioneered by Vernon Smith was the ability to artificially control how much traders valued the commodities being traded (known as inducing values), as this allowed researchers to accurately estimate demand and supply schedules ..."

Anyway, there will be more to come.

[1] I swear this is just John List is giving us the finger.