The Economy at the End of the Universe

Nick Rowe presented a model [as a reductio ad abusrdum] where it appears as though the limit of a series of finite horizons differs by a greater and greater amount from the infinite time horizon model. I think this is just another illustration of how you really have to be careful when taking limits in economics -- some limits make no economic sense.

Here's a graph Nick's model where an interest rate r increase causes the price level P(t) to suddenly drop in order for the path of P(t) to conform to the Fisher equation. The lines represent longer and longer (but finite) time horizons: 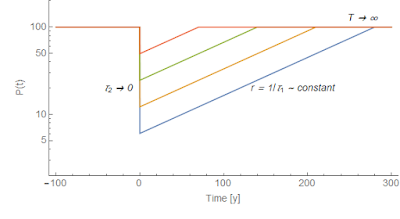 That's because there's another limit being taken that happens before the infinite time horizon limit -- the rate at which prices drop increases with T. Here's a graph that approaches Nick's version as T goes to infinity: 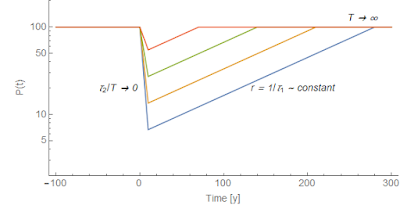 The initial drop in P(t) gets faster and faster in order to drop farther and farther as T goes to infinity. But why should the rate at which prices adjust to a monetary shock get faster with longer time horizons? Maybe there is a good reason. In any case, that is the implicit model of firm behavior in Nick's limit of finite horizons.

And even if this is a good model in a particular finite case, at T equal to infinity we have an infinite (fractional) drop in the price level and an infinitely long climb back up to some finite value. That is to say the limit of Nick's function as T goes to infinity is a step function (black dashed line below). Here I show you the graphs on a linear scale (with double the original time horizons) to make it more obvious: 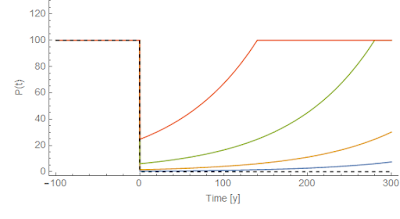 The price level is the function:

With the exception of that point at infinity, this is perfectly consistent with a price level that falls to zero for t > 0. That is to say Nick's model nearly everywhere is consistent with an expectation at infinity of zero! The difference between E[P(∞)] = 100 and E[P(∞)] = 0 is a single point at infinity. This makes it difficult to argue that this model faithfully represents a limit of finite time horizons with an E[P(∞)] = 100 -- in the limit the model only satisfies P(t) = 100 - ɛ for ɛ > 0 at t = ∞.

In other words, this is kind of a mathematical trick. The function satisfies the basic constraints -- i.e. E[P(∞)] = 100 -- but in a way that doesn't make economic sense. The infinite time horizon limit is an economy that collapses after a 100 basis point interest rate hike only to reappear for an instant just for the patrons at the Restaurant at the End of the Universe.
Posted by Jason Smith at 5:30 PM