I noted in comments here that there is no real definition of a recession. The NBER "defines" the beginnings and ends of recessions for the US ... using multiple indicators and a general heuristics like "a significant decline in activity". Since the discussion of recessions came in the course of talking about equilibrium, it made me think of this definition of unemployment equilibrium I played around with. Does it define when recessions are? The gray vertical lines indicate the beginning and end of recessions per NBER. The green rectangles are the region $( t_{0} - \tau,   t_{0} + \tau)$. The width $\tau$ doesn't seem to have a relationship with the duration, however. The transition times work for all of the post-war recessions that I fit in that earlier post (I didn't do the 1980s ones because they seem different -- I'd just connect the two red lines with a straight line and treat it as a single recession, but I'm too lazy at this point to re-work the fit): 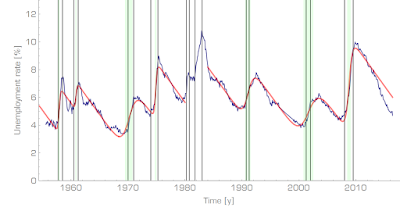 ** Center of both recessions combined

Since I'm home with a cold today, I thought I'd overcome my laziness and fit the 1980s recession(s). I've updated the table above. Here are the graphs: 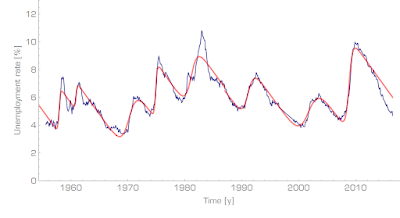 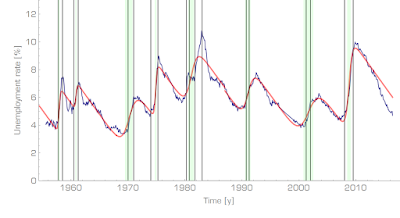 This is getting much more speculative, but I thought I'd add two pieces. First, can we model Obamacare as a positive shock? Second, can we extrapolate a recession from the uptick in unemployment in recent months?

The answers are yes and no, respectively. Here's Obamacare (aka the ACA) as a positive shock (the piece from 2012 to 2016, with transition time in November 2013): 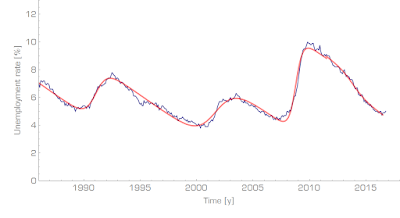 And here is the "prediction", which is completely uncertain: 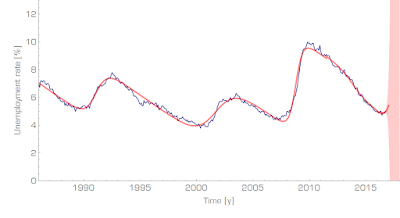