In my continuing adventures in parsing the macrohistory database [0], I noticed that most of the interest rate data looks a bit like the US interest rate time series. So I did a principal component analysis (specifically a Karhunen-Loeve decomposition).

It turns out there are three basic features of world interest rates in the macrohistory database: the US, Japan, and Germany. Here are the component vectors: 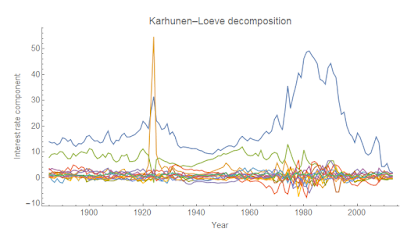 You can see the first three components are really the only ones with structure -- and they match up with the US, Germany (really only the Wiemar hyperinflation), and Japan:

As a side note, the US and Japan are the countries for which the interest rate model works the best. Additionally, if you leave out Germany [1], the US and Japan describe most of the variation of the data (i.e. the German component is mostly used to describe the Weimar hyperinflation in the German data itself).