I thought I'd add a bit more to a series of posts about defining a "dynamic" equilibrium in unemployment where we don't look at a natural level of unemployment U*, but rather a natural rate of decrease (dU/dt)*. This doesn't necessarily have anything to do with information equilibrium (except to say it looks like the US economy is usually in this particular unemployment equilibrium), but rather a particular parameterization of the data. The first five posts are:
This post just adds a couple of other metrics. I show the deviation between the data and the model in the first graph, as well as how the derivative of the parameterization compares (red) to the derivative of the data (gray) in the second graph -- thereby showing the "recessions" as spikes, with the economy remaining in this "dynamic unemployment equilibrium" most of the time. 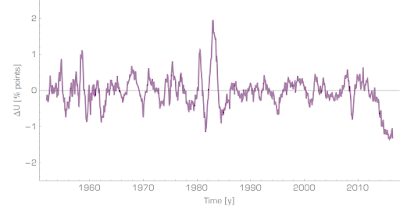 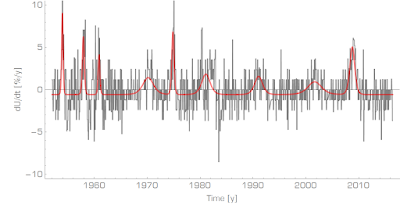 The second graph makes me think of sunspots in the solar cycle (and would lend itself to Steve Keen's ideas about nonlinear dynamical systems if only we had longer periods of data and or some kind of microfoundations).

Here's a post looking at multiple equilibria, and here's another post where I try to use this "model" to do a bit of forecasting.
Posted by Jason Smith at 8:34 PM